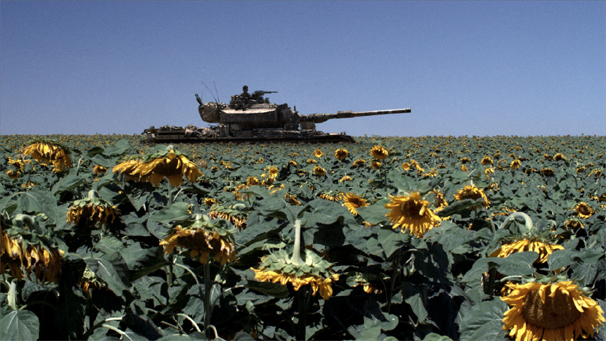 Different worlds, different battlefields: in Lebanon, a hapless rookie Israeli tank crew blunders through their mission with harrowing results, while Robert De Niro and Edward Norton face off in the tense psychological drama Stone. These and other films (Jack Goes Boating, Down Terrace, Animal Kingdom, Takers) are coming to DVD and Blu-ray this week.

The entirety of Samuel Maoz’s claustrophobic war film takes place inside a rickety tank during the 1982 Israeli invasion of Lebanon. Everything the soldiers see is through their gun sight, and most of it is nightmare inducing. A veteran himself, Maoz makes the most of his debut with a horrific, densely layered film that our writer called “quite simply a great war film and a rare instance where the name of the master, Sam Fuller, may be fairly uttered in comparative terms.”

Sometimes one has to wait years for great actors to get around to producing great performances. In this curious film about a parole officer and a troubled convict on the verge of release, Robert De Niro and Edward Norton put aside years of indifferent or gimmicky roles to, as our writer noted, “burrow like ticks into the underbelly of John Curran’s murky moral drama” to such an impressive extent that their performances alone almost make the film (which starts strong but gets cluttered and fuzzy before the end) worth seeing. Animal Kingdom

Martin
Scorsese and Francis Ford Coppola are just two of the boundary-pushing
directors whose visionary excess is echoed in this atmospheric crime
thriller from Australia. In a tangled story about crooked cops,
misplaced loyalties, and twisted family relationships, our writer found that
the “grandiose slow-motion takes, focused flourishes of atmospheric
noise, and exceptional performances” gave the film a “Shakespearean
heft.”

As in Animal Kingdom, crime in this low-budget drama — about a father-and-son pair of crooks who get out of jail and start looking for the rat who turned
them in — is a particularly nasty family business. Unlike the more
ambitious Animal Kingdom, though, our writer found that this darker comedic film used “simple, one-note mechanisms to arrive at its
bloody finale.”

Philip Seymour Hoffman directed and stars in this low-key indie romantic drama about a kindhearted but shy fellow who gets set up with his best friend’s wife’s co-worker, Connie (Amy Ryan). Smitten with Connie, Jack
sets about preparing to take her on two perfect dates, one of which
involves his learning to swim. Although our writer appreciated the
story’s romantic elements, he found the acting frequently “overbearing”
and the climax “cringe worthy.”

A Who’s Who of great modern documentary filmmakers (Super Size Me‘s Morgan Spurlock, Client 9‘s Alex Gibney) were gathered together to make this omnibus film adaptation of the best-selling book about the
unexpected ways in which numbers research can change the way people look
at the world, whether it’s the theory that legalizing abortion reduced
the crime rate or finding out whether schoolchildren can be bribed into
getting good grades. Our critic was disappointed, calling it “too much
of a Frankenstein creation to either solidly deliver the book’s thesis
or exist as a film in its own right.”

In the manner of American Pie, four teenage boys (best friends, of course) pledge to lose their virginities and take a bong hit after each
success. Pretty soon, there’s just one left. Although the use of a
handheld camera is more common in DIY horror films,
our critic thought it worked in this “observant” and “likeable” comedy
that is “curiously not that funny.”

“A free-for-all of stereotypes, clichés, and cardboard-cutout scripting” is what our critic had to say about this crime-film mash up following five master thieves who successfully plan massive heists that take a year
each to prepare but who eventually take one job they shouldn’t have. He
termed the film mostly “lunkheaded and lamebrain” but ultimately
“tolerable” as “bare-bones entertainment.”