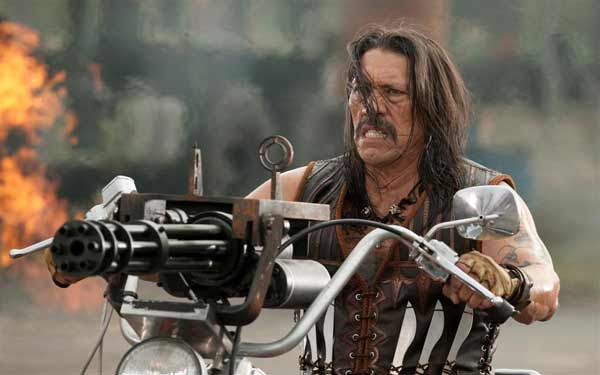 Annoying guests and lots of deadly cutlery: an ex-Fed becomes a pawn in a cross-border power struggle in the hyperviolent exploitation flick Machete, while Paul Rudd invites Steve Carell and a host of other annoying folks over for a Dinner for Schmucks. These and many more films ranging from the good (Catfish) to the lamentable (The Last Exorcism) are coming to DVD and Blu-ray this week.

Heavily tattooed character actor Danny Trejo plays the titular knife wielder in Robert Rodriguez’s bloody tongue-in-cheek story about how Machete Cortez gets wrapped up in a conspiratorial shoot-’em-up when he’s hired to assassinate an anti-immigrant Republican senator (Robert De Niro) but gets double-crossed. Our critic wanted to like the film but found it woefully lacking in almost every department, calling it the Desperado director’s “dullest, shallowest, and most self-satisfied film to date.”

In this remake of the French farce The Dinner Game, Paul Rudd plays an upwardly mobile investment-banking jerk who gets invited to an exclusive dinner party where all the (wealthy) invitees compete to see who can bring along the most irritating guest. Rudd’s is an odd guy played by Steve Carell, who, not surprisingly, turns out to be a little more than a schmuck. While our critic thought that director Jay Roach did almost everything possible to smother the film’s funny concept with overkill Carell’s hilariously nuanced performance “provides all the wit, poignancy, and farce that the rest of the film lacks.”
Case 39

This long-delayed horror film (it was completed in 2006) stars Renée Zellweger as a social worker whose 39th case involves a little girl named Lilith (Jodelle Ferland), whom she rescues from a house right before the
parents were about to lock her in the oven. As soon as viewers suspect that the girl’s name could imply something satanic,
mysterious things start to happen that suggest Lilith is possessed of evil. Our writer didn’t find much at all to recommend in
this film, which tries to mash up The Exorcist and The Bad Seed: “What we get instead is lots of Zellweger’s puffy pout, her slit-eyed superficiality, and way too many CG hornets.”

A
documentary that plays its cards close to its chest, this trick-filled
film follows what happens when a New York photographer gets a painting
in the mail from a little girl in Michigan, based on one of his photos.
An online relationship (Facebook, texting) develops between him and not
just the girl but her entire family. The computerized walls blur when
he and his friends drive to her house to discover what the family is really like. We thought the film was “funny but haunting,” filled with “tautly coiled revelations.”

A
quirky road-movie story evolves out of randomness and happenstance in
this film starring William Hurt as the recently released ex-con, Maria
Bello as the wife he’s nervous about returning to, and Kristen Stewart
as the temperamental teen with whom Hurt catches a ride. Our
critic called this drama a “refreshingly dimensional four-character
ensemble piece.”

James
Franco plays iconic counterculture rebel and beatnik poet Allen
Ginsberg in this lightly fictionalized film about his
life, work, philosophy, and (most importantly) the controversial poem
that he would forever be associated with. Although our critic was very
impressed with Franco’s work and the filmmakers’ desire to stick to
the historical record, he noted that ultimately the “viewer is left
wanting more.”

In yet another extremely poor attempt to return to the frights of the original Exorcist, a cynical preacher tries to show how a case of demonic possession could be faked, but the results (including a creepy family and one crazed
girl in the backwoods of Louisiana) turn out to be more than he
bargained for. We thought the film wasn’t worth the celluloid it was
printed on: “Even the Devil himself would be disturbed by how stupid
this movie is.”