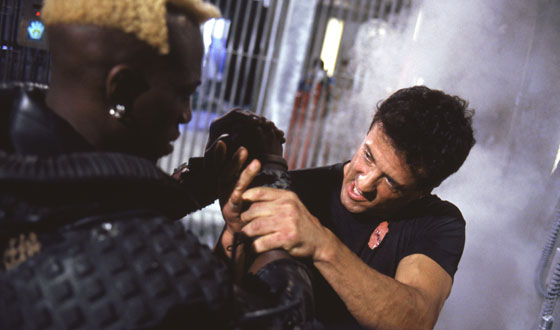 Dangling from a cliff. Incarcerated. Pursued by an army. No predicament is too much for the wily Sylvester Stallone, who always finds a way to defeat the foe at hand. Always. Partially because he’s a true action warrior, but partially because his enemies make the kind of silly mistakes villains ought to avoid when going mano a mano with the great Italian Stallion. But if any aspiring evildoers want to know how not to defeat Stallone, then merely look to those he’s defeated and this handy guide of six things to avoid when battling Sly.

1. Don’t kill his friends.
If there’s one thing you definitely do not want to do before an imminent showdown with Stallone, killing his buddies is it. Witness the case of Drago (Dolph Lundgren), Rocky IV‘s Red heavyweight champ who kills Rocky’s bud Apollo (Carl Weathers) in the ring, awakening Stallone’s vengeful, patriotic wrath and leading to Drago’s downfall. And Drago isn’t the only victim of Stallone’s vengeance-inspired wrath. The Vietcong make the same mistake, killing, torturing, and imprisoning Rambo’s Army mates in Rambo: First Blood Part II, a favor Stallone repays by killing everyone he can.

2. Don’t give him a weapon.
If you find Stallone unarmed, leave him that way. Don’t put anything that could conceivably be a weapon near the guy. That’s a mistake made by some small-town jail guards in First Blood. They have Stallone locked down — a victory in itself — until they try to hold him down and shave his majestic beard. Is it wise to stick a bare blade at the neck of a Vietnam-damaged Green Beret? The guards soon find the answer, as the shiny knife sends Rambo into a torture-flashback-inspired rampage. The guards are downed in one fell swoop, and Rambo’s free as a bird, running for the hills.

3. Don’t mess with Stallone on a cliff or near a helicopter.
Stallone’s enemies ought to stay away from helicopters altogether. First Blood‘s baddies get what’s coming to them when they pin Sly in a ravine with a helicopter and he takes out the chopper with only a rock. A rock! And if First Blood hasn’t imparted the lesson, behold Cliffhanger‘s evil Eric Qualen (John Lithgow), who finds himself trapped with Sly on an upside-down helicopter dangling from the side of a cliff. Wrestling ensues, and with minimal effort Stallone pins his enemy, freeing himself from the helicopter just moments before it crashes to the canyon floor. Sayonara, Qualen.

4. Don’t assume you have rights.
Marion Cobretti, Stallone’s write-your-own-rules Cobra cop, may be a police officer, but if the law doesn’t serve his needs he’s doesn’t get bogged down by rules and regulations. Night Slasher (Brian Thompson) finds this out the hard way, making the naïve assumption that he’ll be tried for his crimes, to which Cobretti replies, “This is where the law stops and I start.” He impales Slasher on a giant hook. The same extrajudicial fate awaits the wisecracking Simon Phoenix (Wesley Snipes) of Demolition Man, who learns that Stallone is a cop second and a badass first. If you mess with Sly, a trial by your peers is probably not in your future.

5. Don’t disrespect the guns.
Look, Stallone has biceps as big around as a python. Just remember that. Otherwise, you could end up like Over the Top‘s Bull Hurley (Rick Zumwalt), who has the nerve to challenge Stallone in arm wrestling. Daring — and foolish. Bull’s not the only moron out there, though. There’s also the security guard in Lock Up, who dares to position himself within arm’s reach, forgetting about the guns. A bicep-enabled grab and pull later, Stallone has the fool’s face in a steam blast. Who’s burning now?

6. Don’t be one of America’s enemies.
Stallone feels the same way about America that America feels about Stallone: very good. So hailing from a nation that counts itself among America’s enemies is a very bad idea. The aforementioned Drago finds out, much to his chagrin, that being from Russia is a terrible idea if you’re going to fight Stallone. Boy, is his face Red. The Vietnamese find out the same in Rambo: First Blood Part II. And the soccer-playing Nazis of Victory not only can’t beat Stallone’s POW squad on the field but find out that their prisoners escape after the game. Don’t mess with Sly, and don’t mess with the U.S.