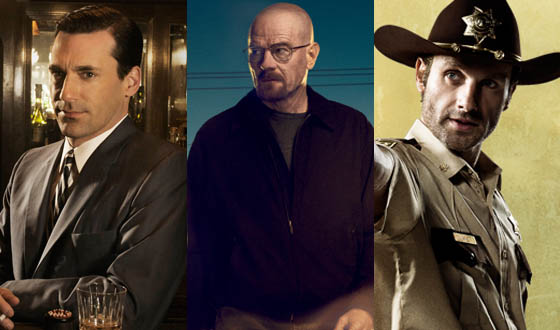 Today the Writers Guild of America (WGA) announced its nominees for outstanding achievement in television, radio, news, promotional writing, and graphic animation during the 2010 season. AMC’s award-winning original series Mad Men, Breaking Bad, and The Walking Dead were all honored.

EPISODIC DRAMA – One Nomination for Mad Men
“The Chrysanthemum and the Sword” – Written by Erin Levy, AMC
AMC, produced by Lionsgate

“I See You” – Written by Gennifer Hutchison
AMC, produced by Sony Pictures Television

About The Walking Dead
Based on Robert Kirkman’s hugely successful and popular comic-book series, The Walking Dead tells the story of the weeks and months that follow after a zombie apocalypse. A survivalist story at its core, the series explores how the living are changed by the overwhelming realization that those who survive can be far more dangerous that the mindless walkers roaming the Earth. The Walking Dead is written and executive-produced by three-time Academy® Award nominee Frank Darabont and executive-produced by Gale Anne Hurd.

About AMC
AMC reigns as the only cable network in history to win the Emmy® Award for Outstanding Drama Series three years in a row, as well as the Golden Globe® Award for Best Television Series, Drama, for three consecutive years. Whether commemorating favorite films from every genre and decade or creating acclaimed original programming, the AMC experience is an uncompromising celebration of great stories. AMC’s original stories include the Emmy® Award-winning dramas Mad Men and Breaking Bad and entertaining non-scripted programming such as AMC News. AMC further demonstrates its commitment to the art of storytelling with curated movie franchises like AMC Hollywood Icon and AMC Complete Collection. Available in more than 96 million homes (source: Nielsen Media Research), AMC is a subsidiary of Rainbow Media Holdings LLC, which includes sister networks IFC, Sundance Channel, WE tv, and Wedding Central. AMC is available across all platforms, including on air, online, on demand, and via mobile. AMC: Story Matters Here.