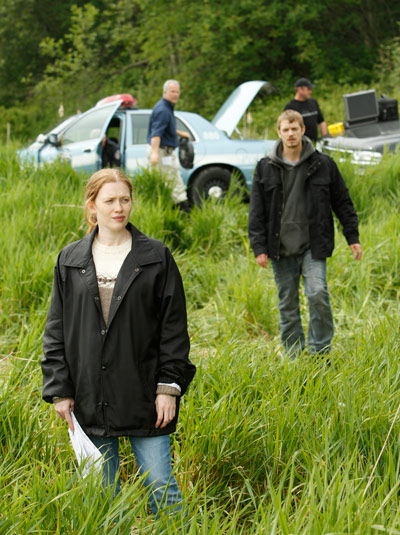 AMC begins production today in Vancouver on the network’s next original series, The Killing. From writer, executive producer and series showrunner Veena Sud (Cold Case), The Killing is based on the wildly successful Danish television series Forbrydelsen. It tells the story of the murder of a young girl in Seattle and the subsequent police investigation. Produced by Fox Television Studios, it is executive produced by Mikkel Bondesen (Burn Notice) for Fuse Entertainment. Fuse’s Kristen Campo co-produces. Season one consists of thirteen, one-hour episodes and is slated to premiere in April 2011.

“The Killing marks the first foray into a crime mystery genre for AMC. We were drawn to the project immediately after viewing the original format. Veena’s adaptation has everything we loved about the original and more — it is compelling and addictive storytelling,” said Susie Fitzgerald, AMC’s SVP of scripted development and current programming. “We could also not be more impressed with the level of talent that we have working on it from our amazing cast and crew to our dedicated partners at FTVS and Fuse.”

David Madden, President of Fox TV Studios, added, “From the moment Mikkel Bondesen brought us the Danish series, we knew The Killing was something special, and that we would need the trifecta of exceptional writer/showrunner, which we found in Veena Sud, a breakout cast, and a creatively driven, forward-thinking network to give this project the life it deserves in the US. We are thrilled to roll cameras on The Killing and look forward to its airing on AMC.”

The Killing ties together three distinct stories around a single murder including the detectives assigned to the case, the victim’s grieving family and the suspects. Set in Seattle, the story also explores local politics as it follows politicians connected to the case. As the series unfolds, it becomes clear that there are no accidents; everyone has a secret, and while the characters think they’ve moved on, their past isn’t done with them.

The Killing stars Mireille Enos (Big Love) as “Sarah Linden,” who is the lead homicide detective that investigates the death of Rosie Larsen. Other castings include: Billy Campbell (Once and Again, Enough) as “Darren Richmond,” Seattle’s City Council President running for Mayor; Michelle Forbes (True Blood) as “Mitch Larsen,” Rosie’s mother; Joel Kinnaman (Snabba Cash) as “Stephen Holder,” an ex-narc cop who joins the homicide division in the investigation to find Rosie Larsen’s killer; and Brent Sexton (W., In the Valley of Elah) as “Stan Larsen,” Rosie’s father.