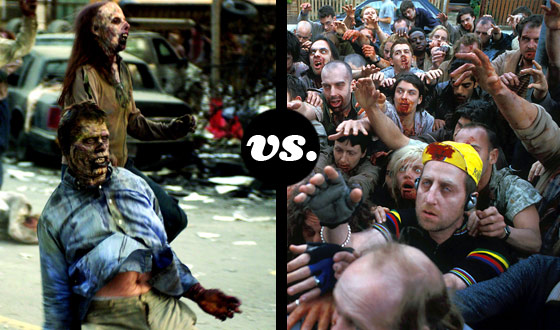 Rick Grimes is encountering some terrifying walkers in The Walking Dead, but he’s not the first to live in fear of the undead. These once-human creatures have been frightening the living since way back in 1932, when White Zombie first hit the silver screen. Back then a zombie was slow moving and best fit to be the bride of Bela Lugosi. Nowadays a zombie can be quick, hungry, and vicious (28 Days Later…) or maybe a little goofy but just as cannibalistic (Shaun of the Dead). The question has never been, Are zombies scary? The question is, Which type of zombie scares you the most? Vote for the best zombies — the ones you truly fear — in AMC’s zombie-movie tournament. Then be sure to tune in on Sundays at 10PM | 9C for the next installment of The Walking Dead.