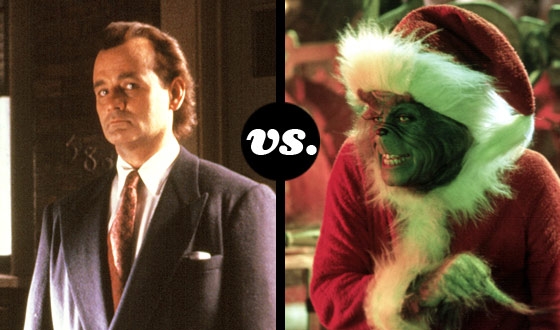 The time of year has come when people try to find time in their busy, grouchy schedules to relish the joy of the holiday season. But it’s also the time when Scrooges — destroyers of holiday merriment — come out to play. No one can dampen the mood like a killjoy at Christmastime, and nobody ruins a holiday like the eight movie spoilsports going head-to-head in this scrooges tournament. The contenders are united in curmudgeonliness: Willie (Billy Bob Thornton) of Bad Santa is a drunken, dirty mall Santa who could bum out Santa Claus himself. Frank Cross (Bill Murray) of Scrooged is the type of sarcastic, workaholic stick-in-the-mud who isn’t happy unless the rest of us aren’t. And before you go around thinking alcoholics and sarcastic TV execs are the only Yuletide downers, don’t forget about Dr. Seuss’s Grinch (Jim Carrey), who may look furry but will do anything to spoil your holiday, and Scrooge (Carey) himself, a man so grumpy that the other grumps are named after him. So which scrooge are you hoping won’t show up to your holiday party? Who’s the holiday killjoy supreme?