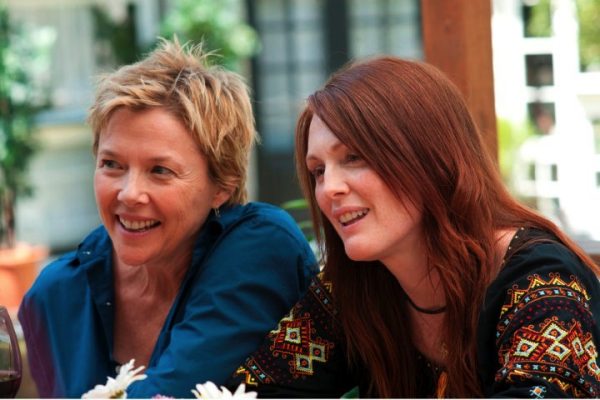 The offspring of a lesbian couple connect with their sperm-donor dad in The Kids Are All Right, while Jim Carrey capers in Disney’s CGI take on Dickens’s Christmas Carol. These films and many other (mostly lesser) contenders are coming out this week on DVD and Blu-ray.

The Kids Are All Right

Annette Bening and Julianne Moore play an upscale suburban couple whose lives are upended when a sperm donor (a chaotic, shaggy Mark Ruffalo) whom they used for their two now-teenage children shows up. Our critic thought this comedy of manners “terrifically entertaining” and the politics and sexuality “covertly complex.”

As Ebenezer Scrooge (who else?) in the latest iteration of the old Dickens mortality tale, Jim Carrey grumps and growls and howls, but our writer found that the “real hero” of this frequently breathtaking film was director “Robert Zemeckis and his newfound devotion to 3-D CGI animation.” While Gary Oldman and Bob Hoskins shine in supporting roles, Carrey “doesn’t create a character here so much as reduce Scrooge to several over-the-top gestures and some insufferable mugging.”

Those in the know know that 1990’s “horror” film Troll 2 — which featured a strange dearth of trolls amid all the laughable acting and even worse special effects — holds pride of place among certain fans of so-bad-it’s-good cinema. But Michael Stephenson’s insightful documentary about the film’s cult status, as well as what its legacy means for the benighted cast, goes far beyond ironic laughter. Our critic considered this “consistently zippy ride” to be “one of the funniest, most entertaining documentaries of recent years.”

The makers of the great American Splendor spend more time with outsiders in this oddball story about a college dropout (Paul Dano) who ends up rooming with a possibly mad, definitely misogynic opera-loving playwright (Kevin Kline). We remembered their first film much more fondly after watching this effort, which “goes about relating sincerely odd characters in a resoundingly ordinary way.”

M. Night Shyamalan took a break from his Hitchcockian thrillers to turn this popular Nickelodeon series about mysticism, prepubescent warrior-monks, and great battles into a dreadful, “staid, interminable miscalculation” that our critic thought would have been better named “The Last Snorebender.”

Continuing the march to cinematic infamy is this supposed comedy about a stand-up kid (rapper Bow Wow) who gets a lottery ticket worth millions only to find that everybody in the neighborhood — from gangsters to preachers to predatory women — now wants a piece of him. Our writer shook his head at what he called the “worst urban comedy in a long time,” which was so dreadfully unfunny that “Carrot Top’s current stand-up routine contains more sustained laughs.”

Coming out nine years after the first film — with all of the original fans of animated-animal humor hopefully having moved on to slightly more substantial fare — this CGI-laden and pop-culture-referencing sequel, involving something about an elite canine unit determined to fight off some threatening cats, seemed to our critic a “marvel of moviemaking laziness.”