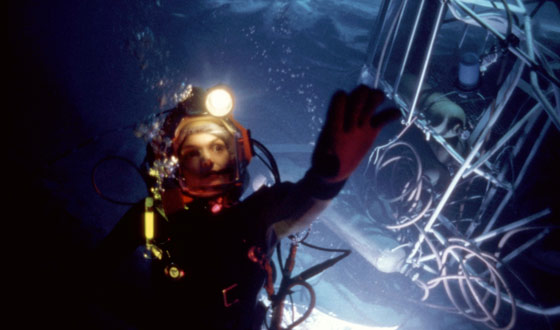 Like Hitchcock and Scorsese, James Cameron is a true revolutionary. The king of the world melds classic storytelling with high-tech filmmaking, throwing caution to the wind and seemingly going out of his way to take risks. With his films’ ballooning budgets and high-concept scenarios, Cameron’s work always flirts with disaster — and threatens to break the banks of the studios that back him. Yet somehow he always pulls through: Titanic, forecast as a disaster, became the second-biggest moneymaker in movie history. Avatar, overcoming similar Schadenfreude, went on to be the top grosser. Though you might find his lack of humility irksome, he makes a pretty strong case for greatness with these five flicks.

1. Aliens (1986)
Acid-drooling ETs, corporate intrigue, androids — oh, my! With its breakneck action sequences, Cameron’s sequel to Alien bests the original — no small achievement. Relentlessly scary and mercilessly intelligent, Aliens is also notable for boasting one of the best female action heroes ever — Sigourney Weaver’s Ellen Ripley. You don’t doubt her for a moment, and — come on — her combination flamethrower-machine gun is just awesome. Weaver was so great that she was nominated for the Academy Award for Best Actress, a rare coup for an action role and just the kind of genre-busting result you’d expect from Cameron’s best flick.

2. The Terminator (1984)
Arnold Schwarzenegger is the perfect robotic killing machine that keeps going, and going, and going, but even in that casting Cameron took a risk. Arnold was originally cast as Sarah Connor’s wiry human protector, Kyle Reese (Michael Biehn), until Cameron talked Schwarzenegger into taking on the role of the Terminator. The rest is history. Everyone wins. Action fans get a standard to rally behind. Horror fans get a mechanical bogeyman. And sci-fi aficionados can revel in the type of temporal paradoxes that lead to all-night conversations over cold pizza.

3. The Abyss (1989)
The Abyss is the rare (very rare) outer-space movie filmed underwater. It’s also an homage to one of Cameron’s favorites, 2001: A Space Odyssey. The scene where Ed Harris goes to the underwater city is a direct take on 2001‘s trippy Stargate sequence, and Michae Biehn’s Navy SEAL gone haywire is another form of killer computer HAL. The difference is that The Abyss has character development, a clever plot, and some amazing action sequences that were done the hard way — in a giant water tank reclaimed from a nuclear power plant.

4. Terminator 2: Judgment Day (1991)
The ultimate action spectacular, Terminator 2 ushered in the latter half of Cameron’s career, in which he keeps raising the stakes with each and every project. The result is as seamless a mix of action and groundbreaking special effects as has ever been made before or since. In trying to best himself and his classic Terminator, Cameron succeeds big-time — taking computer effects to the next level with his quicksilverlike shape-shifting T-1000. In doing so, he even stole the show from Arnold.

5. Avatar (2009)
Cameron’s latest epic pushes the envelope in every respect. It redeems 3-D glasses from seventies schlock, CGI effects from lackluster bloat, and the color blue from the Smurfs. The result is a truly gorgeous film that — like Jake Sully’s avatar experience — is a complete immersion in the fantastic world of Pandora. It took three years and $200 million to make, and, as Cameron would doubtless tell you, it was worth every single penny.

1. Titanic (1997): A self-consciously grand epic might have sank under the weight of its ambitions — disaster movie, romance, thriller, period piece, coming-of-age tale — but instead shattered every box-office record.

3. Ghosts of the Abyss (2003): After the success of Titanic, Cameron takes it easy by going on deep-sea missions in which he explores, in documentary form, his ethereal muse — the Titanic herself.

4. Strange Days (1995): Cameron wrote the gritty cyberpunk flick directed by ex-wife Kathryn Bigelow, which presages Avatar as a sci-fi head trip about a machine that allows people to replay the experiences of others.