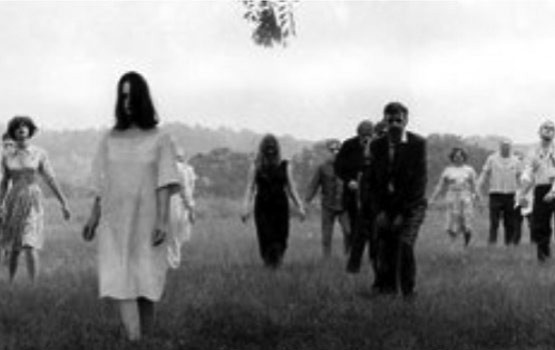 Originally derived from the voodoo word zonbi — meaning “ghost or departed spirit” — zombies have long been a horror-movie staple. The zombie film is one of the most versatile of genres — there have been everything from comedies to science-fiction flicks, thrillers, and even romances involving zombies. Let’s have a look at their grisly cinematic history.

Earliest Voodoo Zombies in the Thirties
The first major mention of the word “zombie” was in William Seabrook’s sensationalized 1929 study of Haitian voodoo, titled The Magic Island. The lurid book detailed his adventures and encounters with the living dead — shambling hulks with unfocused eyes and expressionless faces. In the early thirties, Hollywood was beginning to experiment with iconic-monster films, and it was only a matter of time before the first feature-length walking-dead film appeared: director Victor Halperin’s cheaply made White Zombie (1932). His expressionistic entry starred Bela Lugosi as voodoo priest “Murder” Legendre, the piercing-eyed owner of a Haitian sugar mill operated by mindless human zombies. The 1932 film’s sequel was the inferior, slow-moving Revolt of the Zombies (1936), about a Cambodian sorcerer-priest with a secret formula to create hypnotized zombies. In the hour-long horror thriller Ouanga (1936) (a.k.a. Love Wanga or Drums of the Jungle), native Haitian plantation owner (and voodoo priestess) Klili (Fredi Washington) raised two zombies to kidnap the new fiancée of her ex-lover Adam (Philip Brandon) and sacrifice her in a ceremony.

Zombies in the Forties and Fifties
Three Monogram zombie films followed in the next decade, tying Nazism to zombie lore: the prewar King of the Zombies (1941) featuring a sinister Nazi-like doctor who conducted voodoo to create a zombie army; its quasi remake, Revenge of the Zombies (1943) (a.k.a. The Corpse Vanished), with another mad scientist creating a race of living-dead warriors for the Third Reich; and Voodoo Man (1944), a recycled Revenge of the Zombies that brought back Bela Lugosi as the voodoo master Dr. Marlowe, who kidnapped young women to use their spirits to animate his dead wife.
The next significant zombie film was RKO producer Val Lewton and
director Jacques Tourneur’s I Walked With a Zombie (1943), a West Indies derivation of Charlotte Brontë’s dark romance Jane Eyre.
The movie’s most atmospheric scene was the dreamlike nocturnal walk
through the sugar-cane fields to a native voodoo ceremony
with the sound of drums and the startling appearance of a giant
bug-eyed zombie guard named Carrefour (Darby Jones). The zombie subgenre
declined after the mid-forties, although there were a few notable entries
in the fifties, such as Republic’s twelve-part sci-fi serial, Zombies of the Stratosphere (1952); producer Sam Katzman’s Zombies of Mora Tau (1957); Voodoo Woman (1957); and the box-office bomb Teenage Zombies (1959).

Foreign Zombies Flicks in the Sixties
The apocalyptic Italian film The Last Man on Earth
(1964), starring Vincent Price as the sole surviving doctor besieged by
bloodthirsty vampirelike plague victims, was the first film version of
Richard Matheson’s 1954 novel, I Am Legend (later remade as The Omega Man
(1971) starring Charlton Heston and in 2007 with the original title
starring Will Smith). By the mid-sixties, the U.K.’s Hammer Films — a
company known for churning out dozens of horror films — entered into
the world of zombies with its Plague of the Zombies (1966) (a.k.a. The Zombie),
visualizing the living dead as rotting, reanimated corpses. Building
upon Lugosi’s characterization in 1932, the film told about a wickedly
insane nineteenth-century Cornish squire who dreamed up a macabre plot to
use ancient voodoo rites to raise plague victims from the dead to become zombies working in his tin mine.

Romero’s Revolutionary Modern Zombies
George A. Romero ushered in the modern era of graphically violent and gory zombie pics with his debut horror feature, Night of the Living Dead (1968). His zombies were indiscriminate, flesh-eating ghouls (not produced by voodoo rites) who lumbered stiffly out of their graves and toward a barricaded house to attack fugitives who
were hiding to escape being infected by zombie bites. The low-budget
black-and-white film was shot documentary style with natural lighting
and a handheld camera to accentuate the fear facing the besieged
farmhouse occupants. Romero’s next film, the gore-filled sequel Dawn of the Dead
(1978), further redefined the zombie film with a tale of survivors who
sought refuge in a deserted shopping mall. Now known as the master of
the zombie film, Romero completed his zombie trilogy with Day of the Dead
(1985), which told about surviving scientists and military officers who
performed experiments on zombies in a subterranean bunker until the
zombies revolted. Romero would famously go on to make more zombie
flicks, including Land of the Dead (2005), Diary of the Dead (2007), and most recently Survival of the Dead (2009).

The Contemporary Living-Dead Subgenre
The influence of Romero on future zombie films has been phenomenal, and
many are imaginative derivatives or mutated examples, including Italian
filmmaker Lucio Fulci’s notoriously gory Zombi 2 (1979); Zombi Holocaust (1980) (a.k.a. Zombie 3), one of many copycat Italian zombie movies; director Sam Raimi’s low-budget Evil Dead trilogy (1981, 1987, 1993) with Bruce Campbell as the cult-classic hero Ash clashing against spirit-possessed zombies; Re-Animator (1985), based on H.P. Lovecraft’s early-twenties short story about reanimation experimenter Herbert West (Jeffrey Combs); the Return of the Living Dead parody series (1985, 1988, 1993, and 2005); Wes Craven’s Serpent and the Rainbow (1988), which reconnected zombies with their voodoo roots; director Peter Jackson’s landmark Braindead (1992), the bloodiest and grossest zombie film ever made; the 28 Days Later… (2002) and 28 Weeks Later (2007) films about infected zombies unleashed as a biohazard virus; and four Resident Evil films (2002, 2004, 2007, and 2010).

Note: During its annual Fearfest horror marathon starting this month, AMCtv.com will be showing five zombie classics online for your viewing pleasure, including White Zombie, Revolt of the Zombies, King of the Zombies, Teenage Zombies, and The Last Man on Earth. AMC’s newest original series, The Walking Dead, written and executive produced by Oscar nominee Frank Darabont, also premieres on AMC, on October 31, at 10PM | 9C.