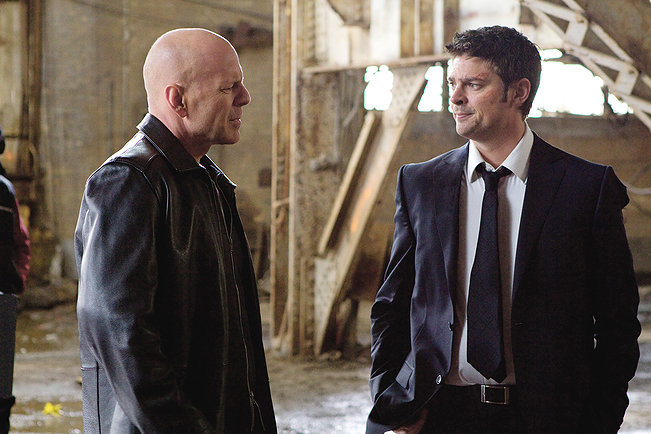 And you thought The Expendables leaned on a bunch of over-the-hill action stars: 73-year-old Morgan Freeman, 65-year-old Helen Mirren, and the rest of the Red cast pack AARP cards next to their semi-automatic weapons and always ensure that they’ve capped the bad guys in time to make the early-bird special at the neighborhood eatery. Next to those two Oscar winners, co-stars Bruce Willis (55) and Karl Urban (38) are spring chickens, which is why we began our recent interview with them with a discussion on aging.

Q: So what does this movie say to you guys about aging?

Bruce Willis: Aging is what we are all doing right now. Right now it’s happening, during the course of this [interview]. Seconds, minutes, hours, days — it’s all going right by you. There’s only one thing to do, and that’s start living it up. Right now. Which is what Karl and I did on Red. We had fun every day. I think everybody had fun every day.

Karl Urban: Yeah, as the youngest member of the cast…

KU: …I have no idea what he’s talking about.

Q: You guys have a brutal fight scene in the flick. Which one of you had the upper hand? Be honest.

BW: Well, I got my ass kicked in that fight scene.

KU: Really? That’s funny, because I actually got my ass kicked in that fight scene.

KU: No, I’m serious. I was in six weeks of [rehab] after that fight scene.

Q: Is there a special chemistry that is required between actors to pull off a fight scene like that?

BW: Well, we rehearsed a lot. And I think we both rehearsed knowing that once the cameras got out in that little room and once we had determined that we were really going to crash into something or into each other that it’s hard to underplay it. You want to make it look like you are really fighting. You can get hurt.

KU: I felt very blessed having this fight with Bruce. He obviously has been doing this for a while, and he taught me a few things that I didn’t know. I mean, for example, if it’s not done correctly, as he says, you can get hurt. He taught me that it’s very important to maintain eye contact as much as possible so that the other person knows what’s coming when. Because it was no-holds-barred. If you have seen the film, it was a pretty intense, gritty kind of a fight. But I’m pretty proud of it. I think it stands up with some of the best fights that have ever been put onscreen.

Q: Bruce, you have been involved in so many fights onscreen. Do you actually know how to fight?

Q: Not that I’m challenging you or anything, but you can fight?

BW: [Laughs] I think I know how to fight. I like to think that, if I had to, I could take you out right now. It would be with one of these chairs, actually. I’d use a weapon. But that’s a good question. I don’t get asked that very often.

Q: Have you ever gotten in a real fight?

Q: You also recently took part in The Expendables, which also rebelled against the idea of age preventing actors from kicking butt. What were you guys trying to say in that infamous scene you shared with Sylvester Stallone and Arnold Schwarzenegger?

BW: We were just talking about what we could do or what we should do. I got into that film just by giving Sly a hard time and going, “Why can’t I be in the film? Why didn’t you call me up? Why didn’t you ask me to do it?” And we were just talking on the phone. I’m pretty sure he mentioned the idea of having the governor in the film, but if he’s going to give me credit [for coming up with that scene], then, yes, it was my idea. [Laughs] No, I think that Stallone did all of the hard work on that film. That was a big, long, hard job to do, and he made everybody look great in that film. There’s a DVD of how they made it, and you can see how he gets hurt and how he gets beat up. And now when I talk to him about it, he always says, “This is what you have in store for you. Someday you’re not going to bounce so high off the ground.”