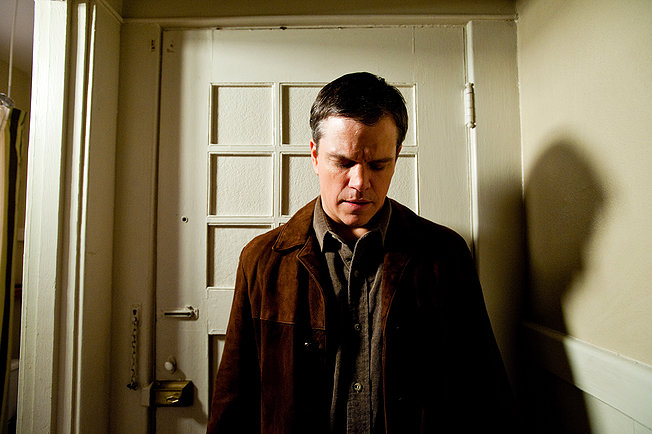 Could Clint Eastwood actually be feeling his own mortality? The 80-year-old filmmaker averages a movie a year and shows little sign of slowing down. Yet his latest picture, the second straight collaboration with Matt Damon, connects three strangers through their fear of death and the uncertainty that awaits us in the afterlife. As Hereafter opens, Eastwood and Damon talked about spirituality, clairvoyance, and the themes that have connected Clint’s most recent films.

Q: So have either of you ever had an otherworldly or near-death experience?

Clint Eastwood: Everybody has had some type. I remember when I was very young my dad was taking me into the surf on his shoulders and I fell off. I can still remember today — even though I was about 4 or 5 years old — I can still remember the color of the water and everything as I was being washed around in the surf before I popped to the surface. But at that age you don’t think too much about it. If you haven’t learned any obscenities yet, a lot of [new] ones probably go running through your mind. [Laughs]

Q: Matt, how does one prepare to play a clairvoyant?

Matt Damon: Well, it was a terrific script; it was really tight.
Anytime anybody would ask me about it, I would tell them it was just a
tight script. It read like a play in the sense where sometimes when you
do a play you don’t have to do anything to explore the material. Every
answer you need is there. I’m somebody who does a lot of research on my
own normally, and I didn’t feel… Well, for one, I didn’t really
want to go down the rabbit hole [of Internet psychics]. If somebody was
recommended to me and I was told “This guy really is fantastic,” then
I would have gone and spoken to him. But nobody like that came up, and
it was really all on the page in terms of getting ready.

Q: Screenwriter Peter Morgan tells a very funny story about how
his Hereafter script was passed up the food chain until it landed in
Steven Spielberg’s lap. How and when did you get involved?

CE: Let’s see. Steven Spielberg called me one day and said, “I have
a script that I’d love to send over to you.” And I said, “Fine.” He and
I had worked together on a few other projects. I read it, liked it, and
called him back to say I’d do it. I didn’t realize I was last on the
list. [Laughs] Most religions seem to ponder the afterlife, but I
thought this was interesting because it wasn’t really a religious
project. It had a spirituality about it, but it was not necessarily
tied into any particular organized thought. I think everybody, whether
they believe in the afterlife or the chance of a near-death experience,
has thought about this at some point. It’s a fantasy. If there is
anything out there like that, it would be just terrific. But that
remains to be seen.

Q: Because the film handles the mystery of the afterlife, it’s virtually impossible for you to provide answers to the questions Hereafter asks about what’s next.

CE: Yeah, it raises a lot of questions, but that’s where it ends.
The questions are there. You pose them, and then it’s up to the
audience to meet you halfway and think about it in terms of their own
lives. They might have had some near-death experiences out there. It
would be interesting to see what those answers are for each person, but
they are going to have to come up with the answers.

Q: There seems to be a theme running through your most recent films, dating back to Unforgiven, about characters fighting to stay relevant as they age. Is this a conscious effort, or is it coincidental to the material you have
selected?

CE: I like to think there are different themes in every film, and I
don’t know if there’s an ongoing theme. You know that’s very
subjective, and that’s a difficult one for me to answer. I think it
would be easier for somebody else to evaluate than it would for myself,
because I don’t think of them that way. Everything to me is
spontaneous. Unforgiven is probably an example of a script that I liked right away but thought, “This is great, but I’d like to do this when
I’m older.” So I stuck it in the drawer for ten years and then took it
out. Other projects just come to me — A Perfect World or whatever.
They just sort of fall. I have no real rhyme or reason. I wish I could
give you some sort of pseudo-intellectual answer that would be great,
and maybe if this were a French cinema class I’d have to fake
something. [Laughs] But I’m not really the person to ask on that.