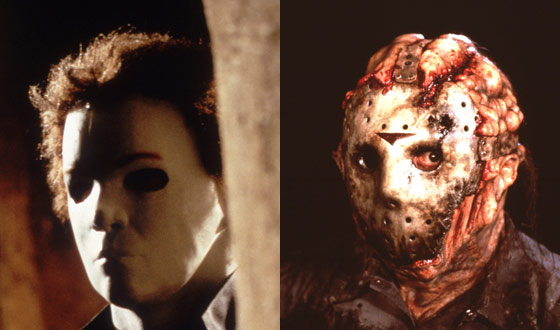 You’d be hard-pressed to find two bigger horror-movie juggernauts than Halloween‘s Michael Myers and Friday the 13th‘s Jason Voorhees — and with good reason. With nearly 25 films and hundreds of victims between them, these masked psychos have been around for decades, and neither shows signs of slowing down his homicidal ways. (Mind you, it helps that neither can be killed for good.) Still, there can only be one king of the killers, and it’s time for us to determine who gets to wear the bloody crown.

Who’s got the better backstory?
Though they both put on masks and murder people, Jason and Michael couldn’t be more different. Jason has a complicated history: he drowned as a child, came back to life, and raised himself in the woods around Camp Crystal Lake. He’s been killed, buried, and resurrected so many times that he’s little more than a gooey and drippy walking corpse. Myers, on the other hand, has a simple origin — he’s the personification of evil. That’s it. There’s nothing human within him — no soul, no love of cheeseburgers, nothing.
Winner: Michael Myers

Who’s a more creative killer?
Even the most die-hard horror fan will find his or her patience tested after six or seven films starring the same killer. It’s up to Michael and Jason, then, to raise their games and keep our interest piqued. Over the course of his series, Mr. Voorhees truly rises to the occasion, dispatching victims with whatever happens to be handy. Sure, he uses all manner of sharp metal objects, but he also really thinks outside the box. He kills with a weed whacker, by slamming a victim up against a tree, and by squeezing a dude’s head until it pops. Hell, Jason even punched one guy’s head clean off. Mr. Myers is far more conservative, largely preferring the time-tested methods of stabbing and choking.
Winner: Jason Voorhees

Who made the better debut?
With Halloween, director John Carpenter created what can only be called a masterpiece of horror. Striking cinematography, a haunting score, and a methodical pace add up to an exercise in fear and suspense with Myers as the bogeyman. Though he made a brief appearance in Friday the 13th, Jason didn’t take center stage until the sequel. Friday the 13th Part 2 is an above-average slasher flick with moments of true terror, plenty of gore, and some winning characters, but it ain’t art.
Winner: Michael Myers

Who has the coolest random plot point?
Michael and Jason have been starring in movies longer than some of you have been alive. So as anyone who’s delved into the worlds of Friday and Halloween knows, each series features its outlandish moments. Halloween: Resurrection features Myers dabbling in reality TV and battling the likes of Busta Rhymes and Tyra Banks. (Unfortunately, only in the movie.) Of course, Jason X sends Voorhees into space. There’s no way a space plot isn’t taking this category.
Winner: Jason Voorhees

Who’s got a flair for fashion?
A cinematic psycho can’t just throw on any old thing when he’s got a job to do: he’s got to be intimidating, practical, and (one hopes) frightening. Myers keeps it simple, opting for basic coveralls and a blank white mask. Meanwhile, Jason is all over the place. He starts his career wearing a pillowcase for a mask and a farmer-style plaid shirt and overalls, eventually graduating to the iconic hockey mask and oversize jacket. That’s all fine and well, but through all of his adventures, burials, drownings, and resurrections Jason never changes his clothes. As a result, he’s filthy, ripped up, and generally gross. Unacceptable. It’s not as if he’s killing every second of every day; surely he can take a moment to get some fresh duds.
Winner: Michael Myers

Who’s a mogul?
In this economy, it’s important that we expand our horizons. I’m not suggesting that Myers or Voorhees become accountants or anything of the sort, but they need to think beyond cinema if they intend to truly flourish. Luckily, both killers have done just that, crossing over into toys, novels, comics, and video games. Yes, I said video games — specifically a Halloween game on the Atari 2600 in the early eighties and a Friday the 13th game released for the original Nintendo system. But Jason is mentioned by name in his title and is a bit scarier, and the game is a bit newer (just a bit). So as far as I’m concerned that gives Voorhees the edge.
Winner: Jason Voorhees

Final score: It’s a draw, because I can’t bear to choose a winner. I mean, Myers can drive a car, but Jason has been to outer space. Jason loved his mama, whereas Michael killed his own sister. What am I to do? I’ll leave it up to you: who’s the superstar of slasher cinema?