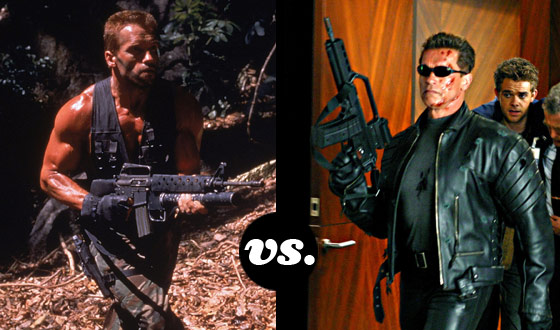 Take one look at Arnold Schwarzenegger, and you can see why he’ll always be one of the world’s toughest action stars. Like the chrome-skeleton Terminator he’s so famous for bringing to life, he’d sooner choose to lose a couple of limbs than a fight. Schwarzenegger’s characters are equally adept at wielding a sword (Conan the Barbarian), wearing a tux and artfully mastering a fighter jet (True Lies), or roaming the jungle hunting down a deadly alien that nobody else can stop (Predator). All Arnold’s characters are tough to the core, but who’s the toughest? Can Dutch of Predator mow down the Terminator in man-on-machine combat? Can John Matrix (Commando) outgun Harry Tasker of True Lies? Vote for the toughest Arnold character and get ready for a dustup to remember.