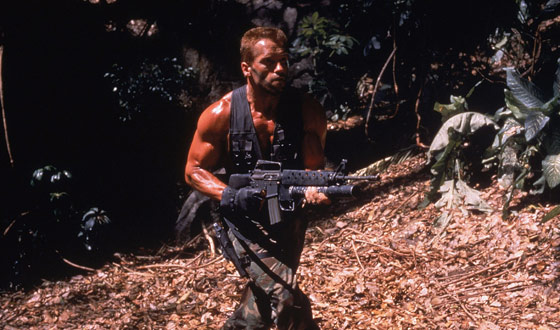 Arnold Schwarzenegger defines the phrase larger-than-life on more than one level: not only is he more muscular than seems possible, but he’s on a level of Hollywood superstardom that few reach. But despite the physique, the looks, and the stardom, Arnold manages to be a bit of an underdog: what were the odds of an Austrian-accented bodybuilder with a funny last name being the biggest movie star alive? But Schwarzenegger always does improbable things (like marry a Kennedy and become governor of California on a Republican ticket). There’s a certain point at which reality itself becomes unrealistic, and that point is wherever Arnold happens to be. These are his most stellar efforts.

1. The Terminator (1984)
Schwarzenegger is perfectly cast as a robotic Grim Reaper — a killing machine with a distinct dislike for the name Sarah Connor. The movie turned Arnold into an action star, but in today’s terms it’s less an action spectacular than a gritty, gripping thriller. The special effects are minimal but vivid: the Terminator dissecting his own eye or the climactic finale where he emerges demonically from a mountain of flames. The tension doesn’t let up, and the movie’s police-station invasion is a classic set piece. But the best part? Seeing Arnold in a role he refused to play as his career grew: villain.

2. Predator (1987)
Arnold makes the perfect prey for an interstellar big-game hunter in this jungle shoot-’em-up. Predator succeeds as much with mystery as it does with action: the chameleon Predator doesn’t reveal itself until the credits are almost ready to run. Schwarzenegger plays a Special Forces operative on a rescue mission in Guatemala with a crew of gun-toting meatheads who appear to have seen First Blood too many times. The movie kicks into overdrive once his fellow commandos drop like flies and Arnold goes tribal, using bows, arrows, and booby traps to do in the high-tech alien.

3. Total Recall (1990)
Construction worker Douglas Quaid gets a memory implant in order to leave his humdrum life behind, but audiences merely have to buy a ticket to the movie. If you’ve seen Total Recall once, it’s not nearly enough. A multilayered mind meld from director Paul Verhoeven, the movie plays tricks with your head that reward repeated viewings. With its comic-book sheen and gratuitous violence, the movie questions the line between dream and reality, entertainment and coma, and provides further evidence of Arnold’s flare for bringing some of the best sci-fi ever to the big screen.

4. Conan the Barbarian (1982)
A bare-chested Arnold swinging a broadsword, sending decapitated heads spinning through the air — it just seems right. And his role as Ur-warrior Conan fit him like a leather loincloth. Scripted by a young Oliver Stone, the fantasy flick follows mighty Conan’s attempt to avenge his parents’ deaths while trying to avoid speaking much dialogue. Even without the near $300 million budget of The Lord of the Rings, Conan packs the same amount of dreamy wonder and one-ups most fantasy movies by featuring not only a bare-chested Arnold but James Earl Jones with long hair.

The rare “event” movie that actually delivered, Terminator 2‘s action sequences are paragons of the genre that continue to impress: the mall shoot-out, the chase in the L.A. River, the motorcycle-versus-helicopter showdown, and the T-1000’s morphing effects (the height of CGI technology at the time) have aged well. But the fuzzy heart-to-hearts between young John Connor and his surrogate-father figure (“Now I know why you cry”) make you want to claw your eyes out, hence one of the great action movies of all time doesn’t rank No. 1. All the same, Terminator 2, I can’t stay mad at you for long — you changed the way we watch movies forever.

1. Twins (1988): This was Arnold’s first attempt at comedy, and, strangely enough, the odd-couple dynamics between Schwarzenegger and Danny DeVito just work.

2. The Running Man (1987): A sadistic reality show finds its ultimate contestant in Schwarzenegger, who promptly turns the deadly game show into his own personal bloodbath. It’s too bad he wasn’t on Jersey Shore.

3. Last Action Hero (1993): This postmodern send-up of Schwarzenegger’s own action catalog was unjustly panned. In fact, the movie is a charming blend of action and comedy, with plenty of inside references for the actor’s fans.

4. True Lies (1994): Schwarzenegger — via super-director James Cameron — summons his inner James Bond as a husband leading a double life as a secret agent.

5. Pumping Iron (1977): Before his movie-star days, Arnold stars in the notorious documentary that shows him as a self-absorbed gym addict playing mind games with Lou Ferrigno, smoking dope, and generally being an ass. Essential viewing for fans and haters alike.