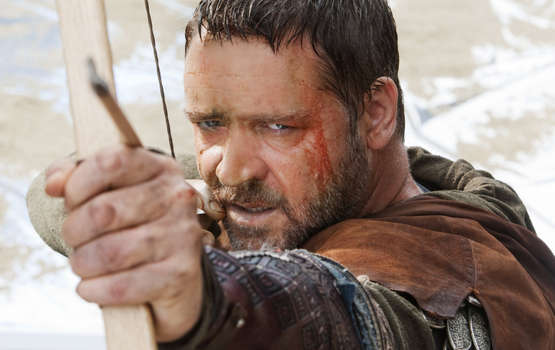 From Ridley Scott and Russell Crowe’s burly version of Robin Hood (no green tights this time around) to the romantic Irish fairy tale Ondine, starring Colin Farrell, here’s a look at the films coming out this week on Blu-ray and DVD.

Ridley Scott directed this purportedly grittier take on the Robin Hood tale that puts the bow in Russell Crowe’s hands and sets him loose upon the battlefields of France and England. Crowe’s Hood is more or less forced into the role once he takes on the identity as a means of survival but warms to it when it leads to the prospect of romance with Marion Loxley (Cate Blanchett). Our critic thought it was “sturdy and taut but inches shy of rousing.”

In writer-director Neil Jordan’s uneven romantic fantasy, a young Irish fisherman (Colin Farrell) pulls from the sea a young woman (Alicja Bachleda) who may or may not be a mystical creature. While our critic thought that Jordan’s tale had some potent and beautifully crafted moments, “It can’t help but remind the audience at every turn of its sweet folkloric nature.”

The Secret in Their Eyes

This roundly praised and Oscar-winning Argentine film crosscuts between genres as it tells the story of a retired federal agent who reminisces about a rape-murder case that he’s using as the basis for a novel. We thought the film was somewhat all over the place — “an epic romance bereft of intimacy, a crime procedural short on thrills, or a character study lacking focus” — but still an “inscrutably engaging drama.”

Adam Goldberg plays the lead, a furiously self-destructive avant-garde musician who both craves and despises the success of his painter brother, in this smart romantic comedy and satire about the pretensions and passions of the New York art world. Our critic appreciated that the film “acknowledges the basic ridiculousness of what it’s presenting, while refusing to truly ridicule it.”