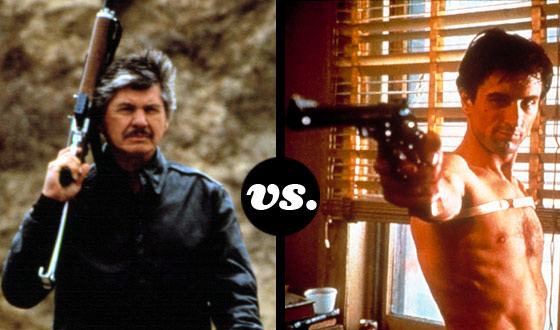 They fight foreign mobsters, totalitarian governments, violent hoodlums, petty thieves, and other bad-guy types. Whom are we talking about? Vigilantes, whose penchant for protecting the masses and sidestepping of the law makes them legendary. Many are like Paul Kersey (Charles Bronson) in Death Wish: a loved one has been wronged, and Kersey’s going to right it, guns blazing. Others have anger issues, but channel those feelings toward a good, if not technically legal or moral, cause, like Travis Bickle (Robert De Niro) of Taxi Driver cleaning up seventies New York. Dirty Harry (Clint Eastwood) and Bryan Mills (Liam Neeson) of Taken are trained law-enforcement officials but see too much law and not enough enforcement, so they take defending the innocent into their own hands. They’ve all got their methods, so whose vigilantism would you want keeping you safe at night?