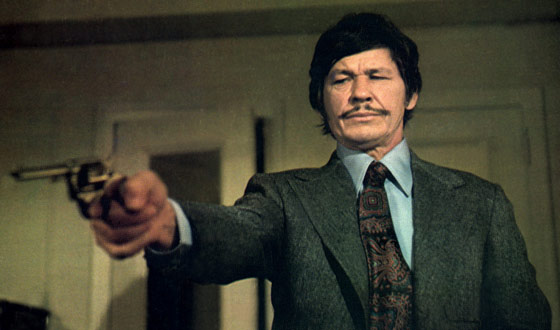 During the seventies, Charles Bronson was one of the world’s most popular movie stars: the laughingstock of U.S. critics but revered as an avenging angel abroad. What made him universal? A stoic persona that spoke louder than words and chiseled, stony features that never flinched. It also didn’t hurt that Bronson’s ethnicity was hard to pin down, allowing him to play Mexicans, Anglo-Americans, Indians, or simply let the audience decide. (Born Buchinsky, the actor was of Lithuanian descent.) Let the critics carp, but make no mistake: Bronson is the resident badass of cinema. Don’t believe me? Here’s his best movies.

1. Once Upon a Time in the West (1968)
In Sergio Leone’s masterpiece, Bronson doesn’t talk much. Instead, he has a little system worked out. He blows into a harmonica to signal his desire to use cowboys for target practice. And he dispenses his opponents with barely a missed beat. As usual, Bronson’s past is a mystery — but you can bet there’s some revenge at the bottom of it. These gaps, like the crannies of Bronson’s own dust-blown features, only add to his mythic status in this most operatic of movies about the American West.

2. Death Wish (1974)
The preeminent revenge flick of the seventies, Death Wish is Dirty Harry kicked in the teeth and thrown in the gutter. While Eastwood’s maverick detective at least paid lip service to the law, Bronson’s architect turned vigilante is motivated by pure bloodlust. After his wife is murdered and his daughter raped, Bronson turns New York’s streets into his own private hunting ground. His deadly message to criminals comes written on a bullet: don’t underestimate the average Joe. Or Charlie, as the case may be.

3. Hard Times (1975)
Not Bronson’s most well-known film, Hard Times, set in Depression-era Louisiana, is certainly one of his best. Bronson plays a drifter who makes his money the old-fashioned way — bare-knuckle boxing. As the eleventh child of coal miners, and no stranger to the brutality of poverty, the role likely struck a personal note for Bronson. It certainly shows in his quiet, wounded performance. Meanwhile, the movie’s savage, elegantly choreographed fight scenes put the entire output of Jean-Claude Van Damme to shame.

4. The Magnificent Seven (1960)
Standing alongside Steve McQueen, Yul Brynner, and James Coburn, Bronson proved himself among his cowboy comrades in the rousing ensemble Western. Based on Akira Kurosawa’s Seven Samurai, The Magnificent Seven is Bronson’s breakthrough performance in the U.S. As an an Irish-Mexican gunslinger hired to protect a group of farmers, he embodies the samurai ethos as well as anyone, and he’s more than willing to go out in a blaze of glory.

5. The Dirty Dozen (1967)
The prototypical guys-on-a-mission movie, The Dirty Dozen is spiritual grandfather to movies like A Bridge Too Far, The Expendables, and Inglourious Basterds. It still packs a punch. Cast as a convicted killer offered a chance at freedom by volunteering (irony of ironies) on a suicide mission, Bronson is in familiar territory. That doesn’t mean he doesn’t do a crack job cultivating menace. Bronson is never more deft at toeing the line between likability and lunacy.

1. Death Wish II (1982): Do California sunshine, palm trees, and laid-back attitudes calm Bronson’s bloodlust? Not a chance. Watch him take Los Angeles in this slimy sequel to the untamed original.

2. The Indian Runner (1991): Bronson surprised many with his subtle performance as a father in this independent drama from Sean Penn, showing that he doesn’t have to fill a city morgue to move an audience.

3. The Mechanic (1972): Bronson is a perfect fit in this heartwarming story of a veteran hit man who mentors a young contract killer. Take it; this is about as sentimental as you’re going to get with Bronson.

4. Rider on the Rain (1970): In a Hitchcockian thriller, Bronson plays a game of cat and mouse with a beautiful murderess. Hard to find, especially in the original French version, but definitely worth watching if you can.

5. Mr. Majestyk (1974): Imagine Rambo as a watermelon farmer mixed up with the mob. And then imagine that Rambo is Charles Bronson. Okay, this movie has a lot going on, but it’s a blast.