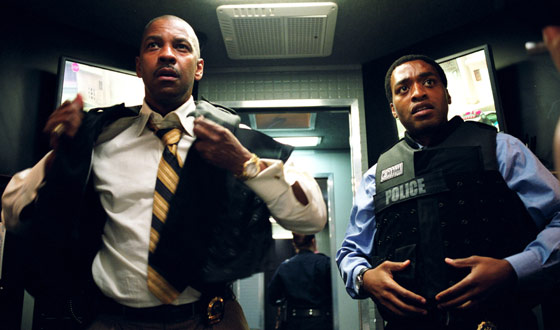 Whether in the form of the corrupt Alonzo Harris (Denzel Washington) in Training Day or the iconic loose cannon Harry Callahan (Clint Eastwood), the anti-hero cop has dominated the silver screen for the past few decades. But there’s still a place for the honest, unimpeachable hero, and there are still a few men in blue whom you can trust, no matter what. These are the top movie cops.

You may think of Riggs as the loosest of loose-cannon cops, but this nutty buddy is never going to let you down. He protects his beloved partner, Murtaugh (Danny Glover), by fighting a bad guy with his bare fists on the front lawn, and he talks his friend down while the man’s sitting on a toilet that’s literally about to explode. Riggs will always be there for you — though he may, unfortunately, be the first who gets killed, which is why he comes in at only the No. 10 spot.

The lone good cop in a vicious, corrupt world that has long since passed him by, Bell still tries his best to do what’s right, despite the fact that the system is working — quite well — against him. He’s unable to tamp down the increasing violence of both the thugs and the good guys of this world, and, eventually, he’s forced to retire because of the strife. But while he’s on the beat, Bell always does the just thing — and, unlike most of his colleagues, he’s never on the take.

Gunderson’s most prominent characteristic in the Coen brothers’ brilliant dark comedy is her Minnesota accent, but that just hides the straight-arrow cop who’s underneath. Despite being overpowered, underpaid, and severely pregnant, Gunderson always remains polite and focused on the case at hand. It’s rare to find a chief of police in the movies who isn’t the bad guy in some way or another, but Gunderson is the exception to the rule, making her a logical choice for No. 8.

A cop so cool he had a hit song named after him (“Axel-F”), Foley’s a streetwise lawman from Detroit who heads out to the West Coast to solve his best friend’s murder. And, of course, you’d expect the former street hood to be the corrupt one, but it’s the rich, prim, and proper patrons of Beverly Hills who turn out to be the worms in the apple — or the rips in the Prada, if you prefer. Axel is so good, in fact, that he’s asked to stay in Beverly Hills to help clean the town up.

In way over his head, Denzel’s good-guy cop tries to handle a bank robbery and hostage situation that is far, far over the level of his intellect — and his pay grade. Though Frazier has been implicated in a theft that occurs prior to the flick’s time frame, his actions in the film prove that he won’t be bought off, whether it’s by his fellow cops (with a promotion) or by the bad guys (with diamonds). He may struggle with how to do the right thing, but, in the end, Frazier always does it.

Before he was commissioner, Gordon was the one guy on the Gotham police force trustworthy enough for Batman to enlist him in his war against crime. When the rest of the force falls into corruption, Gordon stands by his morals and believes the best of the people of Gotham (all evidence to the contrary). Lucky for him, Batman comes along, shows people the way, and gives Gordon a partner in his fight. How could Batman’s ally rank any lower than No. 5?

Check out the last name of the British super-officer in Edgar Wright’s cop farce: it’s no accident. Angel, a wannabe rogue cop straight out of an action flick, is sent to a small town where nothing bad ever happens. Until it does. And when the spit hits the proverbial fan, Angel is a cop you want by your side, kicking evil old ladies in the face and impaling bad guys on miniature models of cathedrals. Angel gets bonus points for his hilarity, and, as a result, he gets a high ranking.

The prototypical action-movie cop, McClane is constantly getting stuck in situations that no regular cop would ever have to face — and yet he always ends up on the winning side. Yippee kayay, indeed. Locked in a building with a gang of international terrorists, McClane saves every one of the hostages, takes out the bad guys, and even helps a regular old beat cop finally get his own day in the sun. Now here’s a guy you definitely want beside you when the chips are down.

Here’s a cop who is incapable of not being absolutely trustworthy. Programmed with the simple directives to protect and to serve, the fusion of cop Alex Murphy and machine is an unstoppable force of justice. If you’re obeying the law, he will stop at nothing to protect you. But if you’re so much as jaywalking? Not so much. Most movies tell us that we can’t trust the machines, but RoboCop is the only thing — man or machine — in whom you can put complete faith to do what’s right.

Why do you think they’re called the Untouchables? It’s because they can’t be bribed, and their the leader, Ness, will stop at nothing to take down the crime boss Al Capone. A good man stuck in a bad time (you may have your own arguments against Prohibition), Ness is the law. Stand with him, and you’re on the side of good. Stand against him, and you are 100 percent evil. Let’s all stand with him then, shall we?