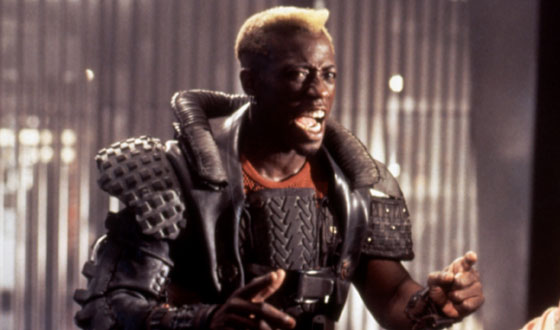 When you’re as big as Stallone, your enemies tend to be larger-than-life. Through his illustrious career, the Italian Stallion’s battled criminal masterminds, genetically engineered boxers, a wide range of dastardly Communists, and even a guy who inexplicably stole Dennis Rodman’s haircut. So which of Stallone’s nemeses was the worst (or, really, the best)?

Although he kicks off the epic Rambo franchise by drawing first blood, Teasle ranks this low thanks to his epic stupidity. He’s an ignorant jackass at heart. He refuses to back down from the standoff, even when Trautman (Richard Crenna) arrives, shows his military badass credentials, and warns that Rambo will end up killing everyone. He doesn’t even have the honor of being killed: he just gets beaten up and then saved by Trautman before Rambo can end him. What a moron.

When Ray Quick (Stallone) isn’t graphically bedding Sharon Stone, he’s doing battle with his nefarious rival, Ned, played by Woods, with typical villainous aplomb. Ned is Ray’s former partner at the CIA, and the pair don’t exactly see eye to eye. So Ned initiates a game of tit for tat with Quick, both of them blowing stuff up in the hope of killing the other. Of course, like all those who face Stallone, Ned eventually loses. But that doesn’t mean you can’t enjoy Woods’s campy performance.

The pithy back-and-forth between titular cops Tango (Stallone) and Cash (Kurt Russell) is what people remember about this flick, but that’s a disservice to Perret. Despite Palance being almost 80 years old at the time, Perret is as menacing a drug lord as you’ll find in the movies. Age aside, he’s everything a villain should be. He’s smart enough to frame Tango and Cash for murder and crazy enough to be the kind of guy who has a self-destruct button built into his mansion.

Bain is the yin to the yang of assassin Robert Rath (Stallone). Rath wants out of the contract-killing game. Not Bain. He’s a complete sociopath who seems to enjoy tallying the largest body count possible. As played by Banderas, he’s also suave and stylish, quite a contrast with Rath’s by-the-book, don’t-kill-any-civilians shtick. You’ve got to enjoy a movie villain so devious he makes another murderer look like a tremendous human being, by comparison.

You might wonder how the villain of Sly’s most celebrated movie could rank this low. Yes, Apollo is an awesomely outrageous Muhammad Ali wannabe and the perfect foil to simple underdog Rocky. The problem is what comes later: we’ve seen Rocky III and IV, and we know Apollo and Rocky become best buds. Hate-respect is one thing, but they’re in guy love with each other. Stallone’s greatest nemesis can’t be someone he — and we — genuinely like.

Qualen isn’t your everyday bad guy. He’s got no muscles to speak of, nor superpowers. What he does have, justifying this ranking, is a bunch of loyal goons and the acting chops of Lithgow, enabling him to successfully pull off fantastic action-villain lines like, “You want to kill me, don’t you, Tucker? Well, get a number and get in line.” Things end poorly for Qualen, like most who who tangle with Stallone. His helicopter is sent plummeting down a mountainside.

The second Rambo flick has its fair share of villains, including the cowardly American Murdock (Charles Napier). But the Soviet Podovsky takes the cake, as he delights in the torture of Rambo and even has his Vietnamese goons take out the one lady Rambo shows any interest in, freedom fighter Co Bao (Julia Nickson). Podovsky gets what’s coming to him, though, as Rambo destroys him by firing a rocket into his helicopter.

At the height of the Reagan era, who was a better villain than a possibly genetically engineered super-freak Soviet boxer with a ludicrous accent and the gall to kill Rocky’s best friend? He kills Apollo, for heaven’s sake. Drago loses just a bit of his credibility when it turns out, in the movie’s climactic match, he’s not in it for the USSR but fights “for me!” Still, he kills Apollo and forces Rocky to train by running through Siberia, while he uses super-eighties technology. Not a nice man.

He’s strong, has no morals, loves killing, enjoys blowing stuff up, and looks exactly like the early-nineties Dennis Rodman. What’s not to love about Simon Phoenix, the un-cryogenically frozen nemesis of un-cryogenically frozen John Spartan (Stallone)? Phoenix is among the ultimate action-movie bad guys, given his love of wanton destruction, his complete inability to be controlled, and, most of all, the fact that he’s apt to say things like, “Holy shit! I love this gun!”

Merely ranking as Rocky’s best enemy (aside from Adrian) would be honor enough, but the viscous Clubber Lang goes beyond that. He’s got a ton going for him: a great name, the fact that he’s basically a meaner version of Mike Tyson (before there was a Tyson), his defeat of Rocky, and the scene in which he makes sexually suggestive remarks to Adrian. Oh, and did we mention he kills Mickey and makes Rocky cry? He’s the best of the worst.