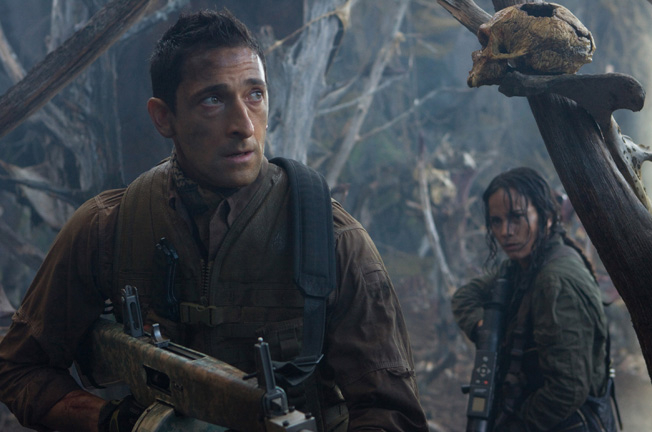 To paraphrase Jesse Ventura, Adrien Brody doesn’t have time to bleed. The Oscar winner is too busy promoting Predators, Nimród Antal’s gory revitalization of the 1987 creature feature that sells itself as a sequel to the Arnold Schwarzenegger classic. Brody spoke to AMC FilmCritic about the subtle homages they make to the original, his appreciation of our military, and his opinion of those dreaded Alien vs. Predator films.

Q: Why do storytellers keep coming back to the Predator as an antagonist worth exploring?

A: I think it’s such an iconic apex, the Predator, so to speak. I mean,
the character is the embodiment of the most lethal hunter, the most
lethal killer. It makes for a very dramatic, suspenseful sci-fi
environment. It’s certainly something that stayed in my subconscious
since the original. I am a huge fan of Predator. That movie
made a huge impression on me and my friends all during our teenage
years.

Q: Are you disappointed at some of the places the brand has gone in recent years?

A: Well, it’s not recent. It has been over a twenty-year period. You
don’t need me to tell you that they strayed a bit from the raw intensity
that the first film had. But this becomes an opportunity to spiritually
come back to that and, hopefully, even elevate the material. I
particularly felt that representing a modern soldier was very
important for me, especially in this world, where so many people today
know, intimately, what soldiers look like. We have ties to friends or
family members who serve in the military. I felt that I wanted to play a
character who was realistic and believable. I wanted to play someone
whom young audiences can relate to, who is heroic in spite of all of his
character flaws.

Q: You have admitted in interviews that you’re not the first
actor who comes to mind when casting an action film like Predators.
But, as you say, the notion of a soldier is completely different than
what it was back in 1987.

A: Right. And the whole style of making films is different. Not to
detract from that — I’m thoroughly impressed with what Schwarzenegger
was able to build from his dedication to his physique. I love him in Predator. But it wouldn’t have been the wisest decision for us to even try to go
down the conventional route and do something derivative of the original
film.

Q: So you guys never planned to have two hulking hands
slapping together as forearms flexed?

A: You know, I did want that. [Laughs] There’s a scene where Alice
[Braga] falls into a hole and I grab her. And I kept petitioning with
both Robert [Rodriguez, the producer] and Nimród to get a bicep shot of
me pulling her out. I’ve successfully integrated three moments that were
an homage to the original. That was another. I just kept trying to get
them in there for fans, because I am a fan. I want that there. I want
the original to live on and us to give people a little bonus for
being so knowledgeable about it.

Q: Did Antal make a conscious effort to avoid using excessive
amounts of CGI when creating the Predator creatures?

A: Yes, but not only with the Predators. We also avoided them with
the effects. I’m running through walls of flame with flame-retardant
gel on me. It’s not like I’m running through a greenroom where I’m
imagining flames all around me. I have stuntmen telling me to hit the
ground and, if I catch on fire, they’ll put me out.

Q: That sounds like vintage seventies filmmaking. Are we getting
back to that?

A: I don’t think so, unfortunately. I think that’s what you get when
you have to make an epic action film on limited resources and have
people as knowledgeable about doing films like this, like Robert and
Nimród are. I do think a lot of these choices were deliberate. It
depends on the filmmakers. But with the improvements that we have seen
over the years in technology, the idea of us going back to seventies
filmmaking is very slim, to me. I don’t think it’s ever going to go
back.

A: [Laughs] That’s not in my plan. Life is long, but that’s not
really in the cards yet. I’m not thinking about that. I’m still trying
to work on my day job.