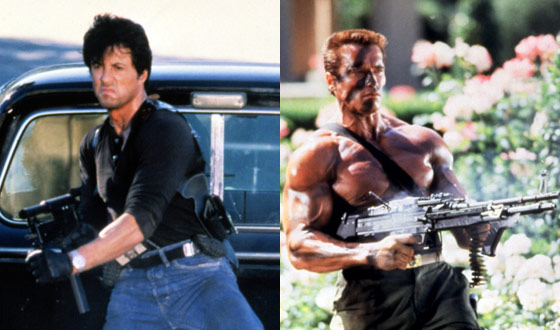 It’s rare that two men come to embody an entire genre of movies the way Sylvester Stallone and Arnold Schwarzenegger define action movies. In the glory days of the action flick (the early eighties through the mid-nineties), there were only two guys that mattered: Sly and Arnold. It’s telling that each needs only one name to identify him, these titans of action — muscular, mealymouthed, and a lot smarter than you’d think. (Stallone wrote Rocky and Rambo, and Arnold governs a state with more people than Canada.) Real action fans know that these two are action movies. But who’s better? That’s the real question. Here’s the breakdown.

Who’s Got the More Impressive Physique?
In a time when people didn’t know or care about action stars or athletes using copious amount of steroids, Stallone and Arnold looked like statues of Greek gods. Today, stars are noticeably toned down. (Shia LaBeouf, anyone?) So who’s pro-wrestler physique was more impressive? Stallone reached critical muscle mass in the early nineties, making co-stars like Wesley Snipes look puny, by comparison. But Schwarzenegger was a freak — the guy was actually Mr. Universe, and it’s likely that the Conan movies were thinly veiled excuses for Arnold to parade around in a loincloth and nothing else.
Winner: Schwarzenegger

Who’s Signature Action Flick Was Better?
Interestingly enough, the best of both guys are sequels. Go figure. But down to the nitty-gritty: Terminator 2 or Rambo: First Blood Part II? Terminator, like every other James Cameron movie, changed the way movies are made and viewed. First Blood Part II was revolutionary within the action-movie genre, taking revenge-killing-spree movies up a notch, helping the country vent Vietnam War angst, and allowing Stallone to parade around with giant guns, in no sleeves, for two hours. But there’s simply no way to discuss the greatest action movie ever without at least considering Terminator 2. You can’t say that about First Blood Part II.
Winner: Schwarzenegger

Need Laughs? Who Does Comedy Better?
A crucial facet of an action star’s repertoire is to deliver the occasional one-liner and grab a well-earned chuckle or two from the audience. While neither Arnold nor Sly has the chops in the area of, say, Bruce Willis, they’re both serviceable. In Demolition Man, Stallone deftly extracts laughs from his fish-out-of-water cop. (Remember the three seashells?) Arnold has a similar role in Last Action Hero and did well for himself in actual comedies, including Twins. Sly’s more comedic turns — think Stop! Or My Mom Will Shoot — were a bit uneven, to say the least.
Winner: Schwarzenegger

Who Can Keep a Straight Face in a Drama?
In addition to extracting a laugh or two, an action star needs to be able to capably handle drama: for instance, he must be able to cry in a manly, authentic fashion if his partner dies. So which of these two guys has those chops? Stallone actually achieved greatness in drama, not action. It was Rocky that catapulted the Italian stallion to superstardom. Say what you will about Sly’s acting chops, but Rocky is one of the greatest movies of all time, and Stallone is the reason why. There’s nary a dramatic turn on Arnold’s résumé, so Sly wins this one easily.
Winner: Stallone

Even Arnold and Sly Have Taken Their Lumps. Who Hit Rock Bottom Hardest?
Before enjoying a Rocky-and-Rambo-fueled rejuvenation, Stallone had fallen hard, stringing together a pathetic group of flops, including Get Carter, Driven, and other movies you’ve never heard of. Put it this way: the best thing he did from 1999 to 2005 was a Spy Kids movie. But none of this compares to the depths Arnold sunk to in Batman & Robin, one of the most reviled movies of all time. In Stallone’s misfires, the movies were bad to begin with, and he didn’t make them any worse. Arnold was one of the main reasons Batman & Robin was so atrocious. As Mr. Freeze, he spends the entire movie painted blue, making cold-weather puns that are so atrocious they aren’t even unintentionally funny.
Winner: Stallone

Who’d Win in a Fight?
Here’s the $100,000 question. Arnold had a bit of additional physical heft, as detailed above. Both are quite savvy with all types of weaponry. But Stallone has boxing smarts and pedigree from Rocky, as well as street smarts from Philly. That’s the kind of gritty toughness Schwarzenegger probably never acquired in Austria.
Winner: Stallone

Final Score
No surprises here: these two warriors tie, 3-3. Given how evenly they’re matched, which action titan has your allegiance?