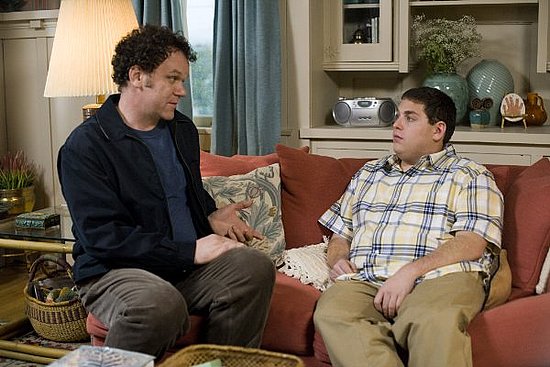 Q: You made this film about a year and half ago. What’s your biggest memory from filming?

A: I remember feeling really unprepared all of the time. [Laughs] Because we were improvising a ton. And Mark and Jay oftentimes just wanted to toss the script out and have us follow our instincts, as far as what the characters would do. So there were a lot of days where I was like, “Man, I hope we’re making a good movie here, because I’m tap dancing as fast as I can!” I remember feeling like, “Well, hopefully there’s a story there.”

Q: Is that different from the type of improvising you do when you work with Will Ferrell and Adam McKay?

A: Yeah, it’s different. What we’ll usually do with Will and Adam
is get a really funny script written, and we’ll do the scene as it’s
written, once, twice, maybe three times. But then we start messing
around, you know? But, basically, once you lose the element of surprise
with the other actors, whether it’s Will or whomever — you know, you
need to keep surprising one another. I mean, you have to stay true to the character, but you also are trying to crack the other guy up. With this movie, there really wasn’t any obligation to try and be funny. The only obligation with Mark and Jay was to be truthful. Don’t come
in with some preconceived idea. Just really take to heart what is
happening in a scene and apply your own feelings toward it. Sometimes
that was pretty difficult. We had to go to some emotionally vulnerable
places. But it was still really fun to be able to improvise and not feel
like, “Oh, man, a minute has gone by, and I haven’t said anything funny.”

Q: So was it cathartic the first time you saw it with
an audience and they actually did laugh?

A: Oh, yeah, totally. The first time I watched it was at Sundance, at
the Eccles Theatre. I’ve had a lot of good experiences in that theater
before. It’s a great place to watch a movie. And Sundance was the
perfect crowd for this movie. Film-festival audiences, in general, are
great, because they’re so surprised. There hasn’t been any marketing for
the film, in most cases. And I think one of the chief attributes of the
movie is that you really have no idea what’s going to happen. I’ve had
people tell me that, at points, they thought [Jonah’s character] was
going to try and kill me! They thought the movie was going to take this
very dark and tragic turn. But people really like that. They like to be
surprised.

Q: And if they are, it means you’ve done your job.

A: Yeah, exactly. There’s so much conventional storytelling out
there. There’s nothing more boring than knowing exactly where a story is
going to go.

Q: People who write about Cyrus
have felt the need to clarify that, for you, it’s not another Talladega
Nights or Step Brothers. Do you feel pigeonholed at all?

A: Nah. It’s pretty tough to pigeonhole me. I fly
pretty fast. I’m really proud of Step Brothers and Talladega
Nights. But those are two movies out of fifty that I’ve done, so
anyone who really knows my work understands that if there is any through line to what I do, it’s variety. I’ve got a couple of films in the can
that are a lot different from this movie, and, hopefully, I’ll continue to
surprise people.

Q: You have a great drunk scene in the movie — the binge during which you meet Marisa’s character. How did you prep for that one?

A: Well, I just got real drunk. [Laughs] No, it was a night shoot, so
I unfortunately didn’t have the crutch of liquor. I would have just
fallen asleep. When I shot that singing part, it was like 4 a.m., and it
was kind of a surreal night. But I’m a real student of drunken acting
myself. [Laugh] I really love Foster Brooks, W.C. Fields, and the great clown drunks we’ve seen over the years. And I have been drunk
before. I will go on the record and say that I have had a drink before.

A: No, no — in life, in life! And it is fun to get really specific
about it. There’s that impulsive behavior that you get when you aren’t
thinking things through. It is a lot of fun to play. And I had Mark and
Jay there to let me know, like, “Okay, you are looking maybe just a little
bit too tipsy there. Tone it down a little!”