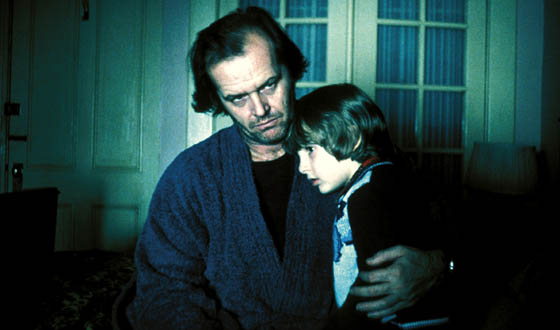 My kids are incensed on behalf of Cressida Cowell, author of How to Train Your Dragon, because the movie version thereof took, in their view, unacceptable liberties with her text. “They changed everything!” Rosie cried. My guess is that Ms. Cowell’s pain, if there was any, was alleviated by the size of Dreamworks’ check. But in her honor, this week I’m addressing one of the more notable “unfaithful” adaptations in movie history; one that was disavowed and disliked by the original author — so much so he arranged his own, more faithful remake 16 years later — but is acclaimed by everyone else (rightly so!) as a masterpiece. Yes, friends, this week we’re talking about The Shining.

The “collaboration,” if you could call it that, between Stanley Kubrick and Stephen King seems, at first, as unlikely as Walt Disney’s famous, failed attempt to make a movie with Salvador Dali. Here in one corner: the most prolific and beloved genre novelist of the last four decades, whose horror tales usually end up celebrating the triumph of small-town Love and Friendship and even, yes, Motherhood; in the other, the strange, reclusive auteur, known for his austere, methodical perfectionism, whose previous movie (Barry Lyndon) everybody had hated, and the one before that (A Clockwork Orange) had actually been banned.

In the novel, a inherently decent but troubled man moves with his wife and child for the winter to an isolated mountain hotel which turns out to be — wait for it — haunted by evil spirits. Said spirits possess and destroy the father, causing him to turn violently against his own family. In the movie, some deference is paid to the idea of the supernatural — the hotel manager casually mentions the place was “built on an Indian burial ground,” instantly coining a cliché — but in the end Kubrick’s Shining is no more a ghost story than Psycho is. Prove it, you say? Consider:

Exhibit 1: The father is played by Jack Nicholson, who, by virtue of being Jack Nicholson already seems half crazy before he delivers his first line. Stephen King objected to the casting, but it was in line with Kubrick’s intent. From the moment you meet him, Nicholson’s Jack Torrance is simmering, sardonic, angry and hostile to his wife and son.

Exhibit 2: Torrance’s wife, Wendy, played by Shelley Duvall, isn’t the independent and resourceful woman she is in King’s book. She’s a foolish, co-dependent, abused wife, incapable of understanding the trap she’s dragging herself and her son into. Hell, she doesn’t even notice she’s married to Jack Nicholson.

(An aside: one of the vast differences between Kubrick and King is their depictions of women. King’s heroines tend to be women doubted or dismissed by others who rise to the occasion when horror strikes. Meanwhile, you search Kubrick’s repertoire in vain for a female character who isn’t either a maddening asexual shrew or an equally disturbing vision of sexual temptation. It’s Mrs. Haze or Lolita, over and over again.)

Exhibit 3: After just 40 minutes of Kubrick’s slow, deliberately paced narrative, Nicholson stands frozen still, with his brow lowered, his eyes peering ahead unblinking: the Kubrick Stare, signifying madness, power, possession. And the ghosts, such as they are, have hardly begun rattling their chains. In King’s novel, you have the unspoken comfort that everything would be OK without that damned hotel, that Strange and Unworldly Source of Evil. But Kubrick isn’t having it.

In the movie, Nicholson’s madness is organic to him, justified in his own mind, and maybe in the director’s as well. The tirades at Shelley Duvall seem heated and genuine, rather than possessed — as Kubrick costumes her and directs her and writes her lines, Duvall does seem whiny and annoying, even, God help us, deserving of “correction.” In fact, Duvall has said that Kubrick himself was terribly cruel to her on set, which, she thinks, was all about helping her reach the necessary emotional extremes of the character. Sure. The novel tells the story of a man transformed into a monster. The movie tells the story of a man finally being allowed to become the monster he’s always wanted to be, which is a lot scarier because that kind of monster is real.

Trying to explain both his admiration for and his disappointment in the adaptation, Stephen King said once that Kubrick’s The Shining was like “a big beautiful Cadillac with no motor in it.” That concept is related to a thought I had about adapting one of my own plays for film: it’s like dissecting one of your children to get spare parts to make a new one. I don’t blame King for disowning Kubrick’s strange reassembled stepchild — even though it’s one of Kubrick’s best movies, thus one of the best movies ever made — but it’s surprising to me King hasn’t seen the commonality between himself and Kubrick. Both of them loved to tell stories of men becoming demons — unleashed, dangerous, scary, deadly. The difference is that King thinks this is a bad thing.

Peter Sagal is the host of NPR’s news quiz, Wait Wait… Don’t Tell Me! heard by three million listeners each week via 520 public radio stations and podcast, and the author of The Book of Vice: Naughty Things and How to Do Them. He is also a playwright and screenwriter, and once wrote Dirty Dancing 2: Havana Nights without meaning to.