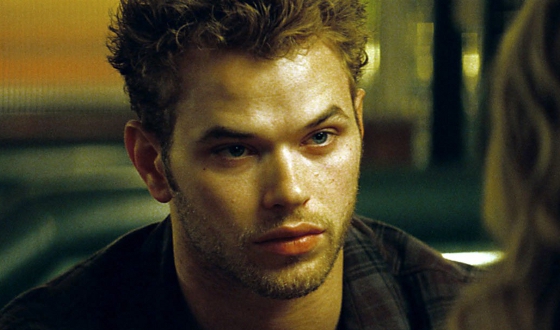 The revamped Nightmare on Elm Street isn’t a shot-by-shot remake of the 1984 Wes Craven original, but there are images that should seem vaguely familiar: a disfigured man wearing a fedora and a striped sweater, slash marks emerging on newly awakened bodies, and a girl named Nancy who’s at the center of it all. The rest of the characters may have changed — including new addition Dean (played by Twilight star Kellan Lutz) — but the hunt remains the same. Lutz compares the original to the remake (with only one spoiler!) and reflects on his life and career post-Twilight.

Q: What did you think of the original Nightmare on Elm Street?

A: You know, growing up, Freddy Krueger was the only thing that scared me. I have three older brothers who picked on me, and they did anything to beat me up, but Freddy was the ultimate freak factor. Because Jason from Friday the 13th or Chucky — they were kind of funny. I even had a Chucky doll. But something that attacks you in your sleep? [Shivers]

Q: And how does the new Freddy measure up?

A: Jackie Earle Haley is amazing at what he does as Freddy Krueger. He helps make this a really scary movie. It’s a great psychological thriller. I do die. Uh-oh, spoiler! [Laughs] But it’s a really cool death scene, and I’m in a scary movie that scared me growing up, so that’s great.

Q: So which gets you more attention these days — Twilight or the Calvin Klein-underwear ads?

A: Well, I had my mom’s best friends proposing [after Twilight], which is kind of flattering. Some of them are really quite attractive. So I might hold onto those numbers and e-mails. But with Calvin Klein, it was always a dream to be a part of the company, and to do it on such a high level? I didn’t know it would be for underwear, at first. But, hey, Mark Wahlberg, it really helped his career, and I can only hope I get half the chance he did. Twilight opens doors, but Rob [Pattinson], Kristen [Stewart], and Taylor [Lautner] are the faces of the franchise, and the rest of us float under the radar, so I think this will allow me to have my time. And hopefully people seeing me in my Skivvies will allow me to have some awesome action movies come my way.

Q: What kind of action movies would you be interested in?

A: I would love to do something along the lines of Captain America stuff. I auditioned for that, and it went great, but I think they want to go a little smaller and bulk them up, like Robert Downey Jr. in Iron Man. They want a weakling who becomes a hero, and I was like, “I can lose weight!” But I really want to be part of something. I want to be the smart CIA agent who kicks some butt and gets hurt and uses his MacGyver instincts to get out of a locked room. That type of thing.

Q: So are you bulking up in preparation?

A: I never have time to go the gym! But to do the Calvin Klein
ads, I tried to bulk up to make the underwear fit, and I started training parts of my legs that I hadn’t really trained before. I just swim and box as much as I can and try to watch my sugar intake. I had to stop eating candy. I could be super-ripped if I didn’t eat so many Gummi Bears.

Q: At least that’ll help you with Eclipse and Breaking Dawn. There’s more Emmett coming up?

A: Yes! A lot more fighting with the Cullens. I know they’re working on scripts, potentially breaking the last one into two movies. They haven’t said anything to us yet. Once my agent gets the phone call that we’re good to go. And I would love to do it in 3-D. What actor wouldn’t?

Q: So when are we going to see an Emmett-based rock band? Bella and Edward already have Twi-rock bands inspired by them.

A: There should be an Emmett band, yes! I have three roommates, and they’re very gung ho about it, when I told them I had an idea to start a band ourselves. We are currently taking classes, and hopefully we could become a 30 Seconds to Mars-type band. I would love that.