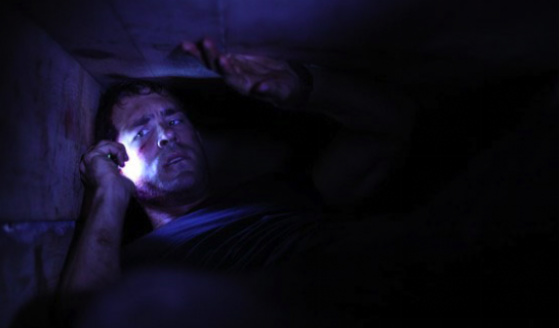 Our beloved little genre is on everyone’s lips this week, thanks to the Spanish indie flick Buried. It took Sundance by storm and set off a minor bidding war that found Lions Gate ponying up a reported $3 million. The premise? In the grand tradition of movies like Oxygen and Buried Alive, a civilian contractor (Ryan Reynolds) working in Iraq wakes up trapped underground with only a knife, a lighter, and a cell phone. He spends the rest of the movie trying to escape. At some point, he’s visited by a big snake.

Doesn’t sound too promising, does it? The reviews from Sundance are rolling in. They may surprise you.

Back when the movie was announced, in June ’09, cinephiles were perplexed — though most gave Reynolds (whose main claim to fame is not his dramatic chops) the benefit of the doubt. SlashFilm said, “I like the idea of Reynolds stretching himself in a controlled little thriller where he really has to carry the film on more than just charm.” Collider went so far as to boldly confess that Reynolds is one of his favorite actors working today.

Ain’tItCoolNews was atypically negative: “Anyone remembering a fantastic TV show called G vs E from a while back may recall an episode…called “Buried” (ahem)…which employed an extremely similar concept. I’m pretty sure this conceit’s been rolled out elsewhere as well. Which is not to imply this Buried will blow… but…I’m just sayin’.” Cinematical observed, “Reynolds has been pretty successful in his career thus far, and a whole heck of a lot of it is do to the actor’s charisma. He’s just so darned likable. But what happens when all that is ripped away and he’s caught in a dark box?”

A very good question. It wasn’t long before bits of the movie were leaked. Fledgling writer Chris Sparling’s screenplay inspired a lively debate on the movie’s IMDb page: people seemed evenly divided as to whether Buried was a model of economical screenwriting or crap.

SlashFilm got excited after seeing the first batch of intriguing promo posters: “Why do the best movie posters come from indie films? The obvious answer is that studio films need to be marketed and advertised with an eye towards profitability and inclusiveness, whereas indie films can frequently take more chances. When you aren’t forced to plaster Ryan Reynolds’ face all over a poster, you can make some pretty interesting art out of a ‘buried alive movie’ concept. Who knew?” HorrorBid was equally jazzed: “This revised official poster of Rodrigo Cortes’ horror indie film Buried has us hyped up for a huge dose of claustrophobia! Not really sure how a guy buried is going to hold my attention for an hour and a half but the premise is so appealing I’ll give it a shot.”

ScreenCrave wasn’t: “I’m happy to see Reynolds in something that doesn’t involve super-mutant powers or romance, but come on? Is that a cell phone in the above photo? I’m assuming he’s using it for light, because if I can’t get service in a parking garage there’s no way he’s getting any bars in there!” (Web Stalker’s cell phone wouldn’t be much help in a situation such like this, but that’s neither here nor there.)

The teaser trailer hit the Internet in early January, at which point things really started heating up. “How else do you tease a film like this?” asked ShockTillYouDrop, before enthusing, “With a video phone message from the man himself. That’s what makes this brief trailer for Rodrigo Cortes’ Buried work. That, and the minor detail of Reynolds’ flashlight going out halfway through his plea for help. There’s no gloss. It’s raw and simple.” EW‘s PopWatch concurred: “Ryan Reynolds, you’re making me sweat. And for once, it’s not because of your ab-licious self….after seeing the trailers, I can only hope the film makes its way past the film festival.” ScreenJunkie spoke for many bloggers when he joked, “It seems like an interesting movie with a strong premise. Haven’t we all wanted to see Ryan Reynolds in a coffin at some point?”

Apparently, we have, at least if the Sundance reviews are anything to go by. JoBlo called the movie “a taut and exciting thriller.” The L.A. Times‘ blog introduced its review by saying, “Buried never leaves the coffin, and that’s good.” E! Online gives Buried a B+: “Ryan Reynolds stars in a thrilling one-man show as a contract driver in Iraq who winds up attacked by insurgents and buried alive in a coffin with little more than a Zippo, a cell phone and no clue as to how he got there. Despite the gimmicky setup, this claustrophobic creepfest never bores.” Even the curmudgeons at Variety liked the movie, calling it “an ingenious exercise in sustained tension that would make Alfred Hitchcock turn over in his grave.” (Grave, Buried: nice one.)

What do you think, fair readers? Will Buried get you out of your cave and off to the cineplex, or will it be crushed under the weight of its own hype?