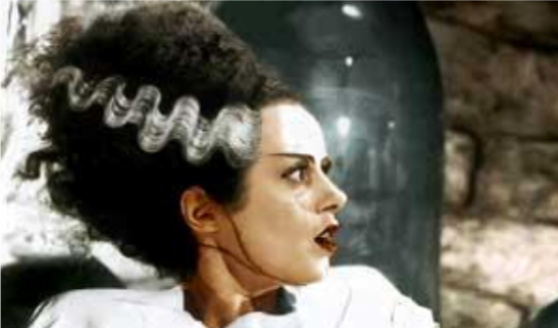 Nothing says Valentine’s Day more than chocolates, Champagne, and a horror movie. A couple of hours of mad, bad, twisted love can make any ordinary relationship look like true romance. But what to watch if you’ve already done My Bloody Valentine, Valentine, and My Bloody Valentine 3-D? For starters, pretty much anything by David Cronenberg. They don’t call him the “king of venereal horror” for nothing. They Came From Within, Videodrome, Dead Ringers, and Crash are especially apropos. Here are some others.

10. Return of the Living Dead 3
Imagine a significant other who loves you so much that he or she would rather have a zombie version of you than none at all — and wants to eat your brains. Hallmark doesn’t make a card for that.

9. Boxing Helena
How not to get your ex-girlfriend back: kidnap her and amputate her limbs. Mention this fear to the busybody who just can’t understand why any girl in her right mind would refuse to give a handsome, wealthy asshole with a medical degree one more chance — and enjoy the silence.

8. Opera
How not to get a girlfriend: repeatedly kidnap her and force her to watch you commit murder, in the hopes of awakening the sadistic impulses of her late mother.

7. The Collector
How also not to get a girlfriend: kidnap her and keep her in a basement — a nicely appointed basement. Gifts of kitchen appliances and “funny” valentines don’t sound so drab anymore, do they?

6. High Tension
Brainy Marie, who has an unrequited crush on her best friend, party-girl Alexis, commits to a hit-the-books weekend at the isolated country house owned by Alex’s parents. Enter a serial killer who slaughters the parents, kidnaps Alex, and overlooks Marie, who willingly goes to hell and back to rescue her friend. Suffice it to say that Alex is less grateful than you’d expect — and that she has her reasons.

5. Possession
The bad news is that your beautiful wife (Isabelle Adjani) is having an affair. The worse news is that she’s cheating on you with a tentacled monster. Oh, and she’s its mother. Cue the throat-scraping fights, emotional meltdowns, and self-mutilation. Marriage is hell.

4. White of the Eye
Funny how you can stumble across true love. One minute you’re Miss Tough Cookie from the Bronx, Hollywood-bound with your pseudo-hipster boyfriend. You stop in Middle of Nowhere, Arizona, and the next thing you know ten years have passed and you’re a stay-at-home mom with a hunky husband who’s never strayed beyond Albuquerque. How’d that happen?

3. Cat People
All-American next-door boy meets exotic, artistic beauty, and suddenly that cute, spunky, level-headed co-worker who’s perfect for him doesn’t stand a chance. At least, not until after he’s married the mysterious foreigner and discovered that she’s got sexual hang-ups. Maybe she’s crazy. Maybe she’s a shape-shifting she-beast. Love definitely does not conquer all.

2. Slither
Small-town businessman Grant Grant (Henry: Portrait of a Serial Killer‘s Michael Rooker) may be a philandering horndog, but he also loves his wife. And from where he stands, the fact that he’s mutating into a cannibalistic squid-slug monster doesn’t mean that she can take up with a handsome sheriff. He’s going to have to slime on over and do something about that.

1. The Bride of Frankenstein
The lonely creature just wants somebody to love, so he, um, persuades Dr. Frankenstein to whip him up a girlfriend. A little creepy. But in his defense, the creature’s efforts to make friends the conventional way haven’t gone well. Sadly, his tailor-made bride turns out to have a mind of her own, and she’s just not that into him. A relationship that starts off this inauspiciously is bound to end in tears, and it does.