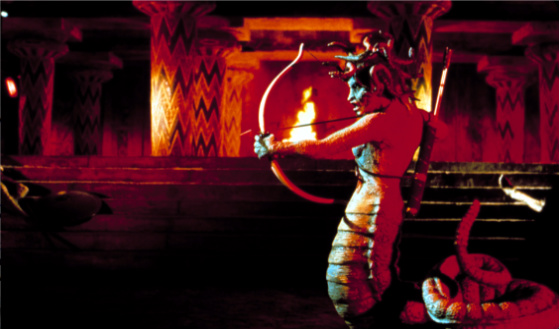 The slasher movies of the late ’70s introduced a character type now known as the Final Girl. Instead of passing out at the sight of a monster, she kicked the creature’s ass. The stalker heyday has come and gone, but Final Girls remain bloodied reminders that women can be heroes, too. On the flip side, however, ladies still have a long way to go. The “flip side,” of course, is the side with the bad guys. Let’s face it: horror franchises belong to the men: Freddy, Jason, Michael — even Jaws is a dude! If asked to rattle off ten great female monsters and villains, you’d be stumped. Don’t worry. I’m not gonna ask. In fact, I made a list for you.

10. Jennifer Check (Megan Fox), Jennifer’s Body
Jennifer is the ultimate high-school mean girl: she’s pretty, she’s quick with a cutting remark, and she’s got a demon inside her. While drinking the blood of your fellow students may not be the best way to ensure popularity, “But teacher, I’ve become a succubus!” is a pretty sweet excuse to get out of gym class.

9. Janice Starlin (Susan Cabot), The Wasp Woman
In Roger Corman‘s Wasp Woman, poor Janice is told that sales at her cosmetics company are flagging because (gasp) she’s aging. When she begins using a royal jelly serum to reverse the aging process, all looks good. When the serum turns her into a murderous insect hybrid, all is bad. I’m sure more than a few Hollywood actresses today would deal with those side effects for the sake of their close-ups.

8. Rosemary (Geretta Geretta), Demons
Her name might not ring a bell, but horror fans will know who I’m talking about if I say that she’s the demon broad who looks like Rick James. Rosemary scratches herself on a mask at a movie theater; shortly thereafter, she turns into a drooling, bug-eyed, pointy-toothed, green-stuff-oozing, kill-happy demon. Pretty soon the theater is overrun with demons and everyone’s trapped inside, fighting for survival. To be honest, the movie makes little sense, but it’s awfully fun and awfully gross.

7. Angela Johnson (Pamela Springsteen), Sleepaway Camp 2: Unhappy Campers
If you’ve never seen Sleepaway Camp, turn away now. Spoilers ahead! The mental hospital where Angela Baker is confined after her murderous rampage has been kind enough to make her female. Trading an outie for an innie did nothing for her mental health. To the contrary, she’s back at camp and back to her old ways as a versatile killer, offing her victims using everything from a lawn mower to battery acid, all while preaching abstinence and teetotalism.

6. May Canady (Angela Bettis), May
May is one of those kids who always gets picked on. She’s shy and suffers from a lazy eye. No wonder when she grows up, she’s a painfully introverted adult. Since she has trouble making friends, she decides to make a friend, Frankenstein-style.The moral here is “Be kind to each other.” Even if your teasing doesn’t cause someone to turn psycho, it’s still not cool.

5. Sylvia Ganush (Lorna Raver), Drag Me to Hell
Sam Raimi’s triumphant return to horror proves once and for all that you shouldn’t mess with gypsies. Loan officer Christine (Alison Lohman) turns down Sylvia’s request for an extension on her mortgage payments. Unfortunately for Christine, Sylvia puts curses on unsympathetic loan officers. Ganush (all makeup and gnarly teeth) is by turns powerful and pathetic. She’s scary, yes, but you feel for her, too.

4. Medusa (A Stop-motion Gorgon), Clash of the Titans
Okay, so she’s made out of clay and Clash of the Titans isn’t exactly a horror movie. But try telling that to little Stacie, who was cowering in fear at the stop-motion Gorgon way back when. Go ahead, tell her — she won’t believe you. Medusa may not have had much screen time, but, thanks to the wizardry of Ray Harryhausen, she stole that movie and became the stuff of lifelong nightmares.

3. Alessa (Jodelle Ferland), Silent Hill
You could argue that religious zealot Christabella (Alice Krige), who rules over the frightened denizens of Silent Hill with an iron fist, is the movie’s true monster. After all, she’s the one who demands young Alessa be burned alive. But Alessa rises from the depths of Hell with lots of razor wire and rips the cult members to pieces, dancing in their blood. Alessa wins.

2. Pamela Voorhees (Betsy Palmer), Friday the 13th
Good old Mrs. Voorhees, with her sensible haircut and utilitarian sweater, chopping up camp counselors in the name of her long-dead son, who drowned because said counselors were too busy making out to pay attention. Had she lived to see Friday the 13th Part 2, she sure would have felt silly, because she would have learned that her little Jason was alive and all grown up. As one of slasher cinema’s first female killers, Mrs. V used her machete to strike a blow for womens’ rights. Repeatedly.

1. La Femme (Beatrice Dalle), Inside
That’s right: the homicidal woman of extreme French fright flick Inside is known simply as the Woman (Beatrice Dalle). She enters the home of Sarah (Alysson Paradis) late one night, on a mad quest to steal her baby; the problem is that Sarah’s still pregnant. Dalle is mind-blowingly scary as she pursues her twisted mission; she’s one of horror’s greatest villains in recent years. Among the females, she rates tops!

Okay, now name your favorite she-creatures and bad girls — whom would you add to the list? I know I said I’d do the thinking, but let’s face it: I’m not getting any younger and thinking gives you wrinkles. Where’s my jelly serum?

When Stacie Ponder isn’t writing about horror movies here or on her own beloved blog, Final Girl, she’s making them. Always, though, she leads a glamorous life, walking the razor’s edge between danger and intrigue.