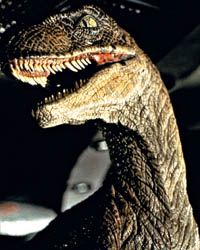 • The International Space Staion might be a clump of junk, but it still resembles a pretty mean TIE figher.

• Everything you wanted to know about Iron Man 2? It’s on the back of the toy packages!

• Five characters will return from the dead during this final season of Lost.

• Steven Spielberg is returning to the land of dinosaurs with the television drama Terra Nova, about a family from 100 years in the future who travel back in time 150 million years to prehistoric Earth.

• A trip down memory lane: When the Star Trek crew traveled aboard the real U.S.S. Enterprise.