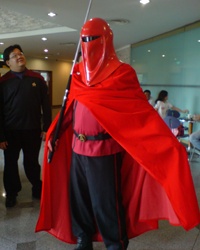 • Scientists say that warp speed would have actually killed Kirk and Spock.

• Just a couple days after the largest lightsaber battle ever, UK Trekkies stage the largest gathering of Starfleet personnel ever.

• Yes, Virginia, there will be a third Riddick movie, but it’ll be a back to basics affair after the execrable second movie’s “Conan in space” plot.

• Just a reminder that as some of your favorite scifi shows get canceled in the coming weeks, a charity single trying to save the show never helps anyone.

• SciFi Wire has the scoop on the coolest, worst and weirdest new Star Wars toys.