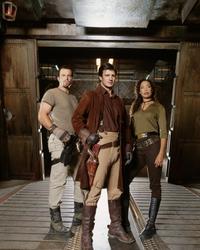 • Some possible Batman 3 plot details for you, including a rumor that the Riddler will be the new villain. I wish they’d give the role to Jim Carrey to redeem himself.

• The Hollywood Reporter has a list of all the television shows in danger of cancellation this season… and surprise! Almost every new scifi series is on the list.

• NASA astronauts in space awake to the Firefly theme song. This would be hell for some (but I’ve always liked it).