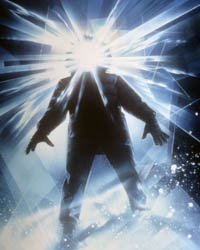 • The Thing prequel gets its stars, but doesn’t anyone care what happened to the Norwegians?

• This isn’t looking good: Both Katheryn Bigelow and Robert Rodriguez have passed on a Planet of the Apes movie.

• I think Captain America director Joe Johnston is just messing with us: He says that Cap will be joined by The Invaders in the new movie, but that they’ll all be British… which doesn’t make any sense.

• Bill Murray confirms his role in Ghostbusters 3: He’ll be a Slimer ghost after all.

• Doctor Who has generated some wonderful concept art…. in fact, too wonderful and creative to ever be done justice by such a low-budget television show.

• Maxim has a photo shoot with Caprica‘s Alessandra Torsani. Hello, Uncanny Valley, let me introduce you to Photoshop Peak.

• Have you ever wondered what the original Star Wars would have been like if Quentin Tarantino had animated it on a Macintosh computer? Me neither, and yet, here it is.