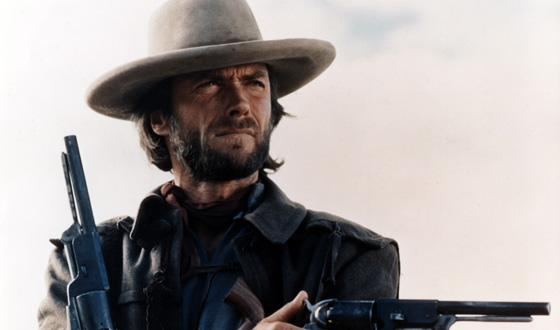 From the Man With No Name to the Outlaw Josey Wales, Clint Eastwood’s Western characters often find themselves facing certain death — and somehow make it to the credits. The same could be said of the 79-year-old actor and director, whose career is a lesson in longevity and survival against the odds: turning a sappy romance novel into one of cinema’s most poignant love stories (Bridges of Madison County), and following up a generic buddy-cop movie (The Rookie) with an excellent revisionist Western (Unforgiven). But his most notorious feats have taken place when he’s wearing hat and spurs. Here are Eastwood’s greatest death-defying stunts.

10. Two Mules for Sister Sara
Eastwood plays a mercenary hired by Mexicans to fight against the French, but he’s hobbled by baggage: a nun (Shirley MacLaine). An arrow attack should have been the end of the dynamite-toting killer, but he’s merely bruised in the shoulder.

9. Paint Your Wagon
When compared to the rest of Eastwood’s oeuvre, this Western musical might seem like safe ground. No gun-toting townies. No marauding revolutionaries. The only thing that might be considered deadly is his singing. (It’s passable.) But Eastwood’s character and his brother are in peril when their wagon falls into a ravine. Only one survives the crash. Can you guess who?

8. For a Few Dollars More
“Alive or dead — it’s your choice,” Eastwood’s bounty hunter mutters as he subdues an outlaw in a saloon. Unfortunately, three of the bandit’s buddies, pistols drawn, are behind him. Now Clint has to ask himself, “Do I give up the reward? Or do I feel lucky?” You bet he feels lucky.

7. The Outlaw Josey Wales
We begin with a group of Missouri bushwhackers, fighting a guerrilla war for the Confederacy. They’re offered amnesty by the Union and accept — that is, except one man: Wales (Eastwood).

6. High Plains Drifter
This nihilistic Western features Eastwood as a man who looks a lot like the fella the town’s citizens recently watched being whipped to death. When three gunmen surround him at a local barber’s, it looks like he’s doomed. Look out for the pistol he’s got hidden beneath his seat.

5. Pale Rider
Eastwood’s second Western with supernatural motifs, Pale Rider follows the Preacher (Eastwood), a mysterious gunslinger who takes up the cause of a group of victimized miners. Is he a ghost? An avenging angel? One thing’s for sure: it isn’t easy hitting a target that can disappear into thin air. When henchmen unload their six-shooters on him, they hit an empty chair.

4. The Good, the Bad and the Ugly
After being abandoned by Blondie (Eastwood), Tuco the Ugly wants revenge. Blondie’s goose looks like it’s cooked. Then comes one of cinema’s great deus ex machinas: an errant cannonball that clears the way for Blondie’s getaway.

3. Unforgiven
Eastwood’s William Munny has been living at death’s door his entire life, intent on avenging the killing of a close friend (Morgan Freeman). When he faces off against a very armed barroom, five against one isn’t very good odds when you’re fighting Eastwood.

2. A Fistful of Dollars
If you shoot a man in the chest, he’s dead, right? Maybe if you’re dealing with someone other than the Man With No Name (Eastwood). In the final gunfight, it seems like he’s done for, but there’s cast-iron plate under his poncho. The same thing saved Marty McFly’s life in Back to the Future III.

1. Hang ‘Em High
When the noose tightens around your neck, you know you’re about to meet your maker. But if you’re the hangman, you’d better make sure the man’s dead (and that he’s not being played by Eastwood). Because he might soon be back, looking to settle the score.