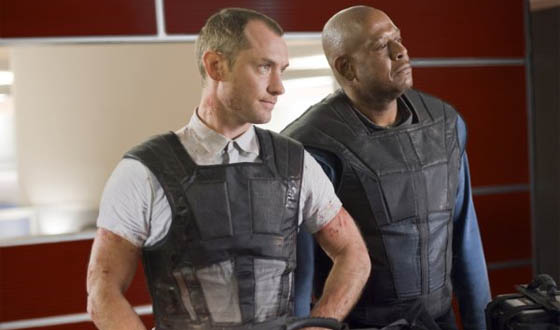 Repo Men, the sci-fi thriller due in theaters this April. For starters, it stars Jude Law as a badass killer on the run in the dystopian future; Forest Whitaker gets to show off his real-life martial-arts skills; and, for those who didn’t like Repo! The Genetic Opera, it’s another chance to see what happens when artificial organs are readily available and made affordable with predatory financing. (You don’t want to miss a payment.) But perhaps the best reason to see this movie is that its story could come true. Thanks to 3-D bio-printing, scientists are closer than ever to manufacturing replacement organs on demand.

It’s unclear how the Union — the fictional megacorporation out to get Jude Law in the movie — makes their Artforgs (artificial organs), but the ones in our future will likely be printed out cell by cell and layer by layer on a machine not unlike the ink-jet printer in your home or office. Except that this one sprays tiny living cells (bio-ink) onto successive layers of an organic matrix (bio-paper) to create a three-dimensional object.

Scientists have been perfecting the technique for years: figuring out how to grow cells in sufficient quantities, deciding which cells work best, and testing out how the cells survive the printing process. It works pretty well: not only do the printed cells fuse together to form one structure, they migrate automatically to specific locations, so the structure will form correctly and function as it should. “We do not have to control what happens when the cells fuse together,” says Dr. Gabor Forgacs, who’s researching the technique. “Nature is smart enough to do the job.” Dr. Anthony Atala put it another way: “Every cell in your body is programmed to do a job, and our job is to put these cells in the right environment in the lab so they know what to do.”

Atala made history when his “printed” bladders were the first laboratory-grown organs ever used in human trials. Starting in 1999, several young children received bladders grown from their own cells, designed in small, medium, and large sizes. So far, the patients are doing well. None of the bladders has been repossessed! Of course, the point of the trial wasn’t to make money off those in need; it was to prove that the organs are safe and effective in the long term.

Soon, the technology will be widespread. In December, Invetech announced the “world’s first production-model 3-D bio-printer” that’s easy to use, extremely reliable, and meant for manufacture and commercial sale. Organovo, a regenerative-medicine company and developers of the proprietary NovoGen bio-printing technology, have hired Invetech to make the device, and over the next two years they’ll be placing the printers globally with research institutions that are investigating human tissue repair and organ replacement. “Ultimately, the idea would be for surgeons to have tissue on demand for various uses, and the best way to do that is get a number of bio-printers into the hands of researchers and give them the ability to make three-dimensional tissues on demand,” says Keith Murphy, Organovo’s CEO.

The good news: arteries “printed” by the device could be used in bypass surgery in as few as five years, and more complex organs, such as hearts, teeth, and bones, should be replicable within ten. The bad news: once the trials are over, firms will likely want a return on their investment. How do you put a price on life-saving technology? If a heart goes for $975,000, as it does in the movie, most transplant recipients will have to get financing. Given the behavior of banks these past few years, it’s safe to assume they won’t be getting great deals.

As these medical miracles become an everyday reality, one has to wonder how people will pay. The future looks great — that is, until Forest Whitaker shows up to collect your kidney.