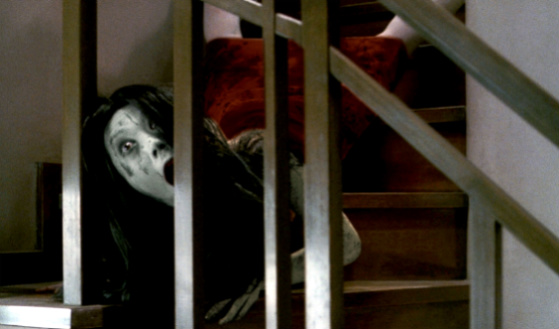 Matt Reeve’s (Cloverfield) remake of the extraordinary Swedish vampire movie Let the Right One In (2008), is due out on Oct. 1 — and horror fans can only hope the movie isn’t as dumbed down as the new title: Let Me In.

But U.S. remakes of foreign horror movies aren’t always as dismal as The Invisible (2007) and Pulse (2006), based on Joel Bergvall and Simon Sandquist’s Den Osynlige (2002), and Kiyoshi Kurosawa’s Kairo ( 2001), respectively. Some are actually good, like these:

10. The Vanishing (1993)
In Dutch writer-director George Sluizer’s bleak 1988 version of The Vanishing, a man becomes obsessed with finding his girlfriend who disappeared at a highway rest stop while he waited by their car. The Hollywood remake is a solid thriller, anchored by Jeff Bridges’ Oscar-worthy performance as a genial sociopath.

9. Nightwatch (1997)
Danish director Ole Bornedal redid his own 1994 serial-killer thriller Nattevagten with Ewan McGregor as the financially-strapped law student who takes a night watchman job at a morgue. The original is creepier, but the remake has its share of seriously spooky moments.

8. Dark Water (2005)
Hideo Nakata’s 2002 Dark Water, in which a young mother fighting for custody of her daughter moves into a haunted apartment, is truly scary in a low-key, creep-up-on-you kind of way. The remake, directed by acclaimed Brazilian filmmaker Walter Salles (Central Station), isn’t. But it is far more atmospheric than the average U.S. horror movie, and features terrific performances by Jennifer Connelly and 8-year-old Ariel Gade (of TV’s short-lived Invasion).

7. Quarantine (2008)
Siblings Drew and John Erick Dowdle’s remake of Spanish writer-director team Juaume Balaguro and Paco Plaza’s zombie-plague movie [REC] (2007) is so faithful to the original, it verges on being a shot-for-shot imitation. But it’s still an ass-kicker in which a two-person cable news crew stumbles onto the story of a lifetime: A previously-unknown virus invades a genteely shabby Spanish apartment building, turning the residents into slavering zombies. The official response: Lock the place down and hope the infection burns itself out without spreading. Ouch.

6. Reflections of Murder (1974)
The 1996 remake of French filmmaker Henri-Georges Clouzot’s Les Diaboliques (1955), in which an odious school master is murdered by his wife and his mistress (Sharon Stone), was a disaster. But a previous do-over, John Badham’s made-for-TV movie, is a tense, terse thriller that features a top-notch cast: Sam Waterston, Tuesday Weld and Joan Hackett.

5. The Ring (2002)
Gore Verbinski’s hit remake of Japanese filmmaker Hidedo Nakata’s Ringu (1998) made J-Horror an international phenomenon. The Ring may not be quite as soul-laceratingly creepy as Ringu, but it’s a damned good horror movie that opened the eyes of parochial American fans to a wide world of ghosts and monsters beyond their borders.

4. Funny Games (2007)
German provocateur Michael Haneke remade his own 1997 meta-critique of home-invasion horror movies with a U.S. friendly cast (Naomi Watts, Tim Roth, Michael Pitt), apparently just to make sure that the xenophobic Americans at which it was aimed got the message. For the record, I hate both smugly finger-wagging versions. But the remake packs the same censoriously nasty punch as the original.

3. The Grudge (2004)
Japanese filmmaker Takashi Shimizu directed the U.S. remake of his own low-budget Ju-on (2002), and included creepy sights and freaky sounds by cherry-picking from several of the interlocking Ju-on sequels. Reworked to focus on Americans living in Tokyo, the American remake capitalizes on the inherent sense of unease that goes with being lost in a foreign country where even the writing is thoroughly alien.

2. Last House on the Left (1972)
Wes Craven’s hugely influential directing debut, about two teenagers murdered by a band of sociopaths and the grim revenge exacted by one girl’s family, reworks an unusual source: Ingmar Bergman’s The Virgin Spring (1959), itself based on a 13th-century Swedish ballad. The two movies make dramatically different use of the same story, so you can’t call one better than the other. But Last House is the horror buff’s version, while Virgin Spring is aimed at the art house crowd.