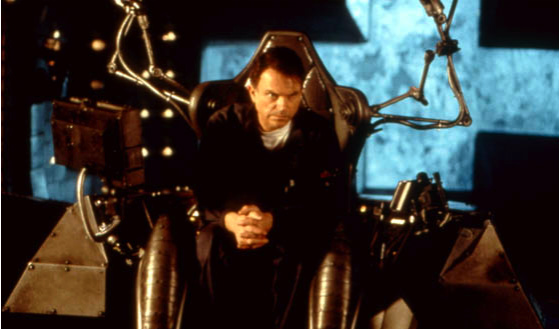 As you know, one of my Slice to Meet You goals is to introduce readers to lesser-known horror movies they may just end up liking. I consider this one of life’s noble missions and — not to boast — it makes me feel a bit like a horror-flavored Mother Teresa.

That said, sometimes recommending stuff is difficult: While I may think a movie is the greatest thing in the history of ever, there’s a chance that someone else may not find it so. From what I understand of science, this is because people have different “tastes” and “opinions.” So I use a lot of math equations before suggesting somebody check out a particular flick. Will it be too gory? Not gory enough? What’s the ratio of bare boobs to clothed boobs, and will that number fall within the potential viewer’s acceptable limits? The whole thing can be stressful. But if I know a friend has enjoyed a particular horror movie, I can easily recommend a similar one he or she will most likely dig. In other words, it can be easy!

Like Friday the 13th (2009)? Try Hatchet (2006)
Whether or not I actually enjoy their output, I give Platinum Dunes credit for having what my grandmother would call “brass ones”; they’re not afraid to have their way with beloved horror icons Leatherface, Jason Voorhees and Freddy Krueger. The Dunes gang reshape the genre’s familiar faces into something “extreme” that today’s kids will relate to, while diehard fans of the originals go apoplectic behind their computer screens. While I fully admit to being one of those fist-waving diehards, I also fully admit that Platinum Dunes may be on to something. Tastes have changed in the 30 years since Jason made his debut (wait, that number can’t possibly be right, can it?), and teenagers — always the target horror audience — want something new. The point of my blathering is that yes, some people like the recent revamp of Jason’s Crystal Lake shenanigans. Therefore, I’d recommend that those folks check out writer/director Adam Green’s Hatchet, an old-school slasher (complete with iconic killer, stupid teens and tons of gore) with a modern pace and style.

Like Sorority Row (2009)? Try The House on Sorority Row (1983)
While I went into a showing of Sorority Row wanting to enjoy it, I really didn’t expect to. Imagine my surprise, then, when I did! Go ahead, imagine it — I’ll wait. While the movie wasn’t completely successful, I was entertained. Granted, I’m a total sucker for movies in which someone dies (usually due to a prank gone wrong), the accident is covered up rather than reported, and then coincidentally, everyone involved dies — causing us to wonder whether the original victim didn’t really die in that accident. So it’s a big “well, duh!” that I’m recommending the slasher movie on which Sorority Row is based. It’s finally getting a nice DVD release this month, so you have no excuse! And there are countless other examples of this little subgenre that you should check out as well, from I Know What You Did Last Summer (1997) to the supernatural South Korean flick Nightmare (2000).

Like Jennifer’s Body (2009)? Try Ginger Snaps (2000)
As with Sorority Row, I sought out Jennifer’s Body thinking there was no way I was going to genuinely enjoy it… I just hoped I wouldn’t want to kill myself. And again, like Sorority Row, Jennifer’s Body left me pleasantly surprised. Though it had more of a fairy tale-like quality than a hard core horror edge (as I think it was pitched), and though the stilted dialogue was too much for me, it was a decent allegory for the burgeoning sexuality of teenage girls, as well as a brief glimpse into the twisted relationships between the same. But Ginger Snaps tackled virtually the same subject matter a decade earlier, with a lower budget, unknown stars and to much better effect. Though it features werewolves instead of demons, Ginger Snaps is a lot smarter and much less self-consciously “hip.”

Like Paranormal Activity (2007)? Try The Last Broadcast (1998)
The obvious recommendation would be The Blair Witch Project, but I’m eschewing it in favor of the movie that preceded (and heavily influenced) it. A forerunner in “found footage” or “P.O.V.” horror, The Last Broadcast is, essentially, a mockumentary within a mockumentary. Interviews are interspersed with found footage, all of it detailing the disappearance of several filmmakers after they trekked deep into the Pine Barrens in search of the legendary Jersey Devil. If the found-footage angle of Paranormal Activity is what thrilled you, then this little-seen flick is well worth your time. If the paranormal elements got you going, well, there are plenty of movies out there to satisfy your cravings. Start with The Haunting (1963) and stop when you’ve reached The Haunting in Connecticut (2009)!

There you have it. It seems that for now, my work here is done. And feel free to tell me what to watch — I love getting recommendations as much as I love giving them!