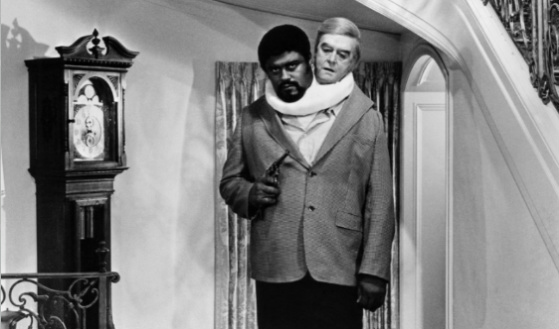 The horror of real life is often worse than the horror of the cinema. Take, for example, the auto-immune reaction to transplanted organs. Imagine, if you will, that your ticker is on the way out. But you’re in luck! A donor has conveniently kicked the bucket, and you and said donor’s heart rendezvous on an operating room table. You get a new lease on life, but your troubles are about to start: Your pesky immune system, you see, thinks the heart now keeping you (and it) alive is an evil, alien thing, like a bacteria or a virus. So Mr. Immune System attacks the heart, and guess what? Immune systems are good at attacking things. Your heart blackens, and the end result is that you’re dead, killed by your own immune system.

So, what’s this got to do with horror flicks? Why, it sets us up to talk about rebellious body parts, of course. Transplants are all the rage in horror fiction, and often make the recipient do many eeee-vil things. With that in mind, let’s take a look at the Top Ten Bad Body Part movies. First, though, the rules — the transplant has to be part of the recipient. This list does not include rogue body parts, such as Ron Jeremy’s Penis in One-Eyed Monster, or the plethora of movies that feature severed hands (insert list here after).

10. The Man With Two Brains (1983)
This movie is borderline horror/comedy, but it does involve brain transplantation and includes a lot of murders, so it’s in. It’s not classic horror, not classic comedy and not even classic Steve Martin, but it’s good enough in all the categories to sneak in at the ten-spot.

9. The Hands of a Stranger (1962)
A concert pianist loses his hands in an accident. A doctor snaps on replacement hands. Boom, dead, done — well, dead anyway, as are the many people who tick off the pianist in the minutes to come. You’ll notice this sounds a bit familiar when you reach No. 2 on the list… but hey, a good idea is worth doing twice. Or more.

8 (tie). The Thing With Two Heads  (1972)
The heads of former NFL star Rosie Greer and Ray Milland wind up sharing the same body. Hilarity and motorcycle chases ensue. Come on, you’ve seen worse — it can’t be as bad as Highlander 2, right?

8 (tie). The Incredible Two-Headed Transplant (1971)
Yes, that’s right, two two-headed transplant movies in two years. Holy crap. Why do these two flicks tie? Because they are conjoined in their badness. Hooo! Clearly, the early ’70s were the Golden Era of Transplant movies, as you’ll see from this next entry…

5. Gin Gwai (2002) /The Eye (2008)
Gin Gwai is the original Korean thriller, The Eye is the schlocky U.S. remake — though it’s schlock balanced by the presence of Jessica Alba, who can balance a lot of schlock by just showing up and smiling. Girl has been blind all her life, gets an eye transplant, discovers she can see… dead people.

4. Body Parts (1991)
Jeff Fahey (of Lawnmower Man and TV’s Lost) stars as a psychologist who loses an arm in an accident. Damn, them pesky limbs are just all over the place, ain’t they? So what do the doctors do? Why, the most logical thing in the world, of course — replace the arm with one from an executed serial killer. Question: Don’t doctors watch horror movies? Like, ever? Bad idea, but a decent flick if you completely stop your brain from working for the final twenty minutes.

3. Parasite Eve (1997)
Oh sure, you’ve seen movies with transplanted hands, arms, eyes, even movies with two heads, but how many mitochondrial DNA horror flicks have you seen this month? Thought so. While this one plays fast and loose with those pesky “rules” of biology, the concept of mitochondrial DNA lurking about for billions of years until it can spring forth as its own sentient being is pretty frickin’ cool. A slow-boiler with plenty to think about, this is by far the wackiest “transplant” movie on the list.

2. Mad Love (1935)
A horror flick adapted from an early scifi story (Maurice Renard’s 1935 “Orlac”), this one stars the beyond-awesome Peter Lorre. A pianist loses his hands in an accident (damn, that sure happens a lot), and they’re replaced with with those of — you guessed it — a murderer. Of course, this murderer was also a circus knife-thrower and the pianist’s new hands have a pesky habit of launching sharp projectiles at anyone who pisses him off. An absolute horror classic, and the template from which Body Parts and other movies were made.

1. Frankenstein (1931)
Well, sure, his whole body is transplants, so right off the bat that puts homes in contention for the tippy-top of the list. But come on, Dear Reader, this … is … Frankenstein (pronounce that like “This. Is. Spar-tah! but, you know, with “Frankenstein” instead). It’s damn near impossible to realize just how far ahead of its time this flick was, and it was made from a book that basically created science fiction. In the other nine movies, transplants result in death. Frankenstein is all transplants, so you can do the math. Here’s the equation: Mary Shelley + Boris Karloff + director James Whale = The Number One “Bad Body Part” Movie of all time.

New York Times best-selling author Scott Sigler writes tales of hard-science horror, then gives them away as free audiobooks at www.scottsigler.com. His novel INFECTED was named as Border’s #1 mystery, thriller and horror novel for 2008. His next major hardcover horror/thriller ANCESTOR will be out on May 4.

You like transplants? Chuck Norris donated one ounce of awesome to Scott, which Scott had embedded in his dome. That’s right, right in the gray matter. Where the hell do you think all these awesome, whoo-ass stories come from. From an ounce of Norris’ awesome, that’s where.