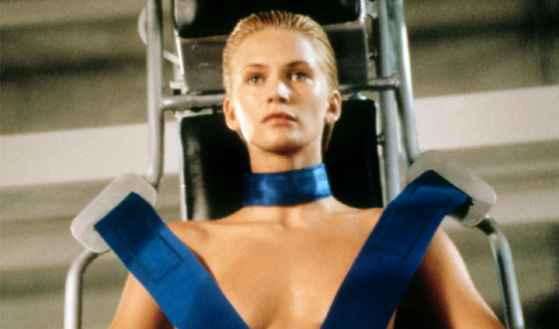 Listen up, men of Earth! Female aliens may look sexy — in fact, a disproportionate number of them resemble members of the Swedish Bikini Team — but tread lightly should you cross paths with one. Odds are, she wants your precious bodily essences, and you probably won’t like the way she goes about getting them. And even if she has some other unearthly agenda, you stand a good chance of ending up with the short end of the stick.

There’s a reason they say the female of the species (Species, get it?) is deadlier than the male. And it’s not just that an awful lot of them have dozens of long, thick, thrusting tentacles. With that in mind, study this list of the ten top girls of alien horror in horror history and commit it to memory. The wretched, worthless, puny human hide you save may be your own.

10. The Astounding She-Monster (1958)
She has an astounding glow, anyway: Those alien suns must be great for
the skin. Unlike most of the alien-babe sisterhood, she isn’t an alien
sex fiend: She’s actually an emissary from a friendly planet who only
starts slaughtering humans when they panic and attack her. Look no
further than this ultra-cheap B&W cautionary tale for the primary
inspiration behind Larry Blamire’s hilarious spoof The Lost Skeleton of Cadavra (1991).

8. Attack of the Monsters(1969)
And you thought the only alien cuties in Kaiju Eiga were the singing “Peanut Twins” from Mothra. Wrong! Check out the foxy cosmic chicks who lure two silly boys into a flying saucer. The lads are bedazzled, until they realize the aliens just want to snarf their brains. Good thing flying-turtle monster Gamera is on their side… otherwise, the Earth boys would be, well, even more brainless than they already are.

7. Decoys (2003)
Remember an icky little ’80s shocker called Breeders (1986), in which alien sex fiends prowl college campuses looking for virgin coeds to impregnate? Welcome to the girl power version… trust us, being the world’s first pregnant man isn’t all its cracked up to be. Despite which fact, Decoys 2: Alien Seduction followed in 2007.

6. Queen of Blood (1966)
OK, she’s not from Mars… but that’s where an unfortunate crew of Earth men — including John Saxon, Basil Rathbone and Dennis Hopper — pick up a green-skinned alien gal with an awesome behive ‘do and an unquenchable thirst for blood. Let’s just say that this exercise in interstellar diplomacy doesn’t end well.

5. The Faculty (1998)
Aliens possess the staff and faculty of Herrington High: Be honest, now — could you resist the advances of school nurse Salma Hayek, even if you suspected that she was really a thing from another world? How about Famke Janssen or Bebe Neuwirth… man, those frakkin’ aliens did their “hot for teacher fantasy” research before, um, mounting their evil invasion!

4. Lifeforce (1985)
Hmmmmm…. So, you find a derelict spaceship filled with the shriveled corpses of hundred batlike things, plus three glass coffins containing naked humanoids. What do you do? What if one of the naked humanoids is French stunner Mathilde May? Now we’re getting somewhere. Incautious astronauts bring the humanoids to Earth, where space vampire May breaks out of her coffin and starts doing her vampire thing. Can you say, “thinking with the wrong head?”

3. The Substitute (2006)
What’s up with Miss Harms, the sixth-grade sub? She acts all nice with parents, but she’s mean as hell to her students, reads their minds and eats live chickens… whoa, she’s not from around these parts. Yes, it’s Danish. But director Ole Bornedal also made Nightwatch … dude knows horror.

2. Species (1995)
This is the big bad mama-jamma of all alien sex babes movies, starring Natasha Henstridge as “Sil,” the product of extraterrestrial DNA research that inevitably goes horribly, horribly wrong. Hestridge is a stunner, but H.R. Giger’s (Alien) Sil designs are pretty eye-catching, in an “if I pretend I never saw them, will those images disappear” kind of way. Species spawned two sequels: Species II (1998) and Species III (2004).

1. Aliens (1996)
She’s big, she’s bad and she’s the origin of a world of monsters: The Alien Queen. If ultimate-final girl Ripley’s mano a mano smackdown with the mother of all nightmares isn’t the greatest catfight in the history of horror, I don’t know what is. Once you’ve shrieked, “Get away from her, you bitch!” what’s left to say?