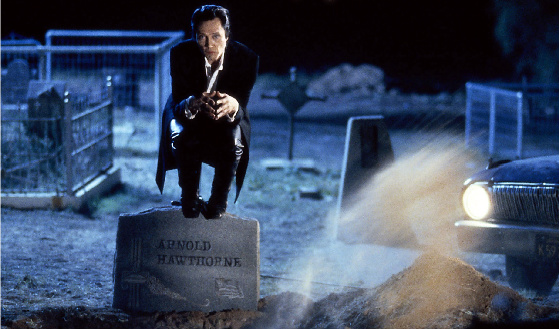 Everyone who grew up believing in guardian angels, raise your hand if you found the whole idea super creepy. Seriously… angels who prowl around in the shadows, keeping an eye on what you were doing? Sure, they have your best interests at heart, but doesn’t that sound an awful lot like cosmic stalking?

Most movies about angels accentuate the positive: Cute angels, sweetly sexy angels, wise and benevolent angels who gently manipulate human affairs with an eye to the best possible outcome. That’s all very nice and all, but it pays not to forget that Lucifer was the best and the brightest of God’s angels until he got an attitude and decided he’d rather rule in hell than serve in heaven. Hence movies like Legion, in which good angels and bad angels kick the bejabbers out of each other with an eye to earning their wings — even if they have to tear them off each other. With that in mind, take a stroll through this garden of evil angels… pray they’re not looking over your shoulder.

1. Soultaker (1990)
Joe Estevez (Martin Sheen’s not-so-successful brother) plays the Angel of Death, who’s looking to collect the souls of four teens lying near death after a car crash, in this ambitious low-budget movie. Not great, but the original version is still better than the edited-all-to-hell one that wound up being mocked to ribbons on MST3K.

2. Gabriel (2007)
In this offbeat Australian horror movie, Gabriel, the last of the Archangels, tracks down his missing brethren and enlists them in one last battle against the fallen angels — the fate of every soul in purgatory hangs in the balance. Flawed, yes, but also admirably audacious and pretty damned amazing-looking for a low-budget, independently produced movie.

3. Frailty (2002)
You want to talk evil angels? Try the glowing, beatific-looking one who tells an all-American dad (Bill Paxton) that from this point forward, it’s his God-given mission to hunt down and kill demons in human form, plunging the man’s two young sons into a nightmare of bloodshed and deception. This chillingly low-key picture, which Paxton also directed, is one of the most underrated psychological thrillers of the ’00s.

4. Dogma (1999)
OK, Bartleby (Ben Affleck) and Loki (Matt Damon) aren’t exactly bad, though Loki did used to be the Angel of Death. Morelike bad-boy angels… but they’re out of sync with God’s current agenda, so they’ve been banned from Heaven and exiled to Wisconsin. And they’re not the kind of angels who take such insults lying down… suffice it to say, Kevin Smith’s blackly comic spin on matters of faith offended the hell out of many of the faithful.

5. The Prophecy (1995)
Christopher Walken plays the archangel Gabriel — you should be scared already. But wait, there’s more: Viggo Mortensen is Lucifer, and there’s a war ranging in heaven between the righteous angels and the fallen. Trust me: You don’t want to be the puny human caught in the middle! The gold-standard for evil angel movies, The Prophecy spawned two ungodly sequels: The Prophecy II (1998) and The Prophecy 3: The Ascent (2000).