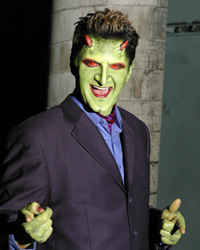 • According to multiple sources, Tobey Maguire will play Bilbo Baggins in Guillermo Del Toro’s The Hobbit.

• The Big Bad in Buffy Season 8 has been accidentally revealed, and its causing a rather explosive conflagration in the Whedonverse.

• All the promos and trailers for Lost Season 6 you care to shake a stick at, including a Muppet Dr. Chang!

• Avatar pretty much swept away the 67th Global Awards, prompting James Cameron to make an acceptance speech in Na’Vi. Yeesh.

• Mad Max 4 will be half live-action, half CGI? They don’t have deserts to shoot in anymore?

• Speaking of Mad Max 4, it looks like Mel Gibson will at least get a cameo.