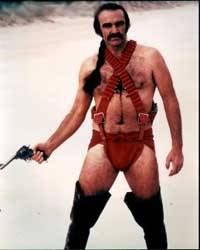 For the first time since Avatar’s release, it has been beaten this weekend at the box office… by The Book of Eli.

• Even though it’s one of their biggest money makers for the last decade, Marvel is killing off all of its Avengers titles next year as part of the Siege event.

• Although four books have been announced and written, Pocket Books is holding off on four Star Trek novels this year until J.J. Abrams fills in more of the reboot’s backstory.

• James Cameron says he’s not interested in Spider-Man anymore, referring to the franchise as “sloppy seconds.”

• Is The Book of Eli just Zardoz for the 21st century?

• Joss Whedon admits that Dollhouse is really over.