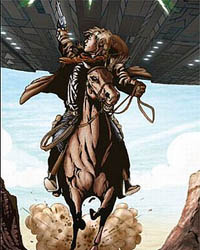 • Lawrence Fishburne has joined the cast of Predators as some sort of Yakuza boss. Say what?

• With Robert Downey Jr. out of the project, Daniel Craig is in talks to join the cast of Cowboys and Aliens.

• Sony’s wish-list for the new director of their Spider-Man movie is filled with strange names like David Fincher, Wes Anderson and James Cameron.

• Speaking of Cameron’s Spider-Man, here’s some neat storyboards from his last stab at the franchise.

• And speaking of Cameron yet again, he says it would be downright stupid not to do an Avatar sequel, given how much it cost to get “the musculo-skeletal rigging of the main characters” right. Right.

• A man accused of putting cyanide into Tylenol capsules in 1982 is now writing science fiction novels with roughly the same plot.

• Director Joe Johnson talks about the next Jurassic Park trilogy and exactly how he’s going to change the character of Captain America.