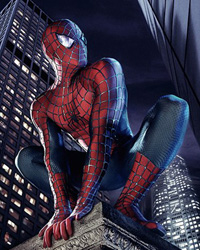 • The producers of Lost give some spoilers about the sixth season. Boone and Libby are coming back!

• And that’s all she wrote for Sam Raimi and Tobey Maguire: They’ve dropped out of Spider-Man 4, and Sony now plans to reboot the franchise in 2012.

• Speaking of Tobey, I suspect it’s a lie, but he cutely claims he wears his Spidey costume to kids’ birthday parties from time to time. I know what I want next year!

• Scientists prepare to adjust the Doomsday clock! Did 2009 bring us closer to destruction? All signs point to yes!

• Robert Downey Jr. would rather be Sherlock Holmes again than a cowboy fighting aliens.

• After Doctor Who’s completion, Russell T. Davies explains just how he manages to write such incompetent and impenetrable plots.

• Michael Bay’s Transformers 3 will start filming in May 2010.