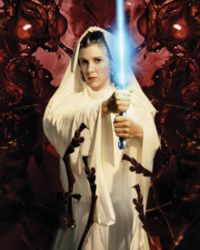 • In honor of Chuck, io9 lists twelve of the best and worst scifi brain upgrades, but somehow forgets to mention the jelly job AMC gave me when I took this post.

• Hugh Jackman threatens us all with a Wolverine sequel to start shooting in 2011.

• John Malkovich confirms that if Sam Raimi wins his battle with Sony, he will star as the Vulture in Spider-Man 4. If Raimi loses that battle? Frickin’ Carnage. I know.

• Want to know which planet in a galaxy far, far away your local weather conditions resemble? Just check out the Star Wars weather finder. Predictably, the northern hemisphere is Hoth-like right now.

• Both Avatar and Star Trek have been nominated for the Writers Guild of America Award for best screenplay.

• Artist James Kuhn does the most bizarre scifi face paintings. Check out his Jabba!