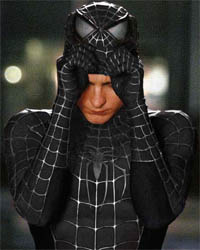 • It’s official: Spider-Man 4’s production has been delayed because Sam Raimi and Sony can’t come to an agreement about the script.

• Forgotten what happens in Lost? Catch up before the sixth season with this eight-minute-and-fifteen-second recap.

• War Machine’s creator says Iron Man 3 might use the Tony Stark as an alcoholic storyline of “Demon in a Bottle.”

• Philip K. Dick’s estate is suing Google over the name of its new smartphone, the Nexus One, which sounds similar to the Nexus Six replicants in Do Androids Dream of Electric Sheep? Good luck, guys: Nexus Six isn’t even trademarked, let alone Nexus One.

• After Avatar, everyone’s rushing to do movies in 3D.