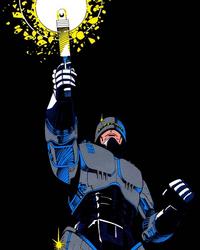 • Avatar, Star Trek and District 9 are all vying for the best special effects Oscar, to the surprise of absolutely no one.

• Tony Stark might be working on some new armors in Iron Man 2, but they don’t have anything on the crazy designs coming out of the animated Iron Man Adventures.

• The new trailer for the Star Trek Online MMORPG makes it look like an excellent continuation of the spirit of the TNG universe… for better or worse.

• Cinematical has some interesting theories on why Avatar is defying usual box office patterns and remaining more or less static in returns week after week. I know exactly why: repeat visits.

• Lost‘s producers discuss the final season, explaining it might return as a franchise — although without them as the creative team behind it.

• Will Avatar’s success make the Aronofsky Robocop remake a 3D flick, or just delay it indefinitely?

• George Lucas goes on The Daily Show and says “Whatever” to critics of the prequel trilogy. Laughing all the way to the bank!