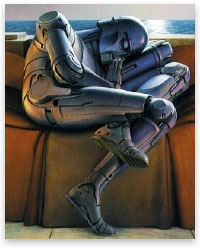 • Although early reports had it as something of a disappointment, James Cameron’s Avatar is already closing in on Titanic’s box office numbers.

• The teaser trailer for the next Doctor Who season is out. The new Doctor’s catch phrase? Seems to be “Geronimo!”

• Better off Ted reveals the origins of Doctor Who’s Daleks.

• For the die-hard Avatar fan: a three gram piece of Unobtanium, suspended in genuine Pandora atmosphere.