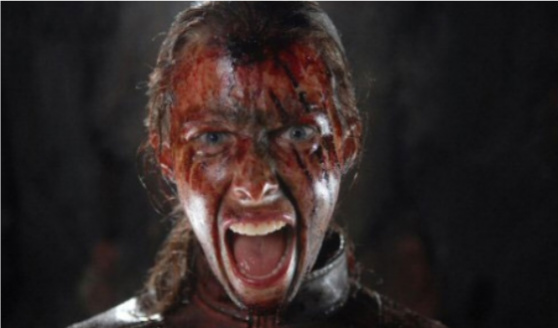 Unlike their mainstream brethren, horror sequels are something of a dicey proposition. Blockbuster franchise sequels like Transformers: Revenge of the Fallen, Indiana Jones and the Kingdom of the Crystal Skull and Live Free or Die Hard regularly delight audiences and clean up at the box office, but what was the last genre sequel you saw and loved? I’m guessing it wasn’t The Hills Have Eyes Part 2. Or Halloween II, or Friday the 13th Part 2, or…. well, the list goes on. And on. And on.

For whatever reason, news that a hit horror flick is getting the sequel
treatment is generally a sign that it’s time for fans to cut their
losses and move on. This past week, The Descent Part 2 — the follow up to Neil Marshall’s terrifying spelunking (!) shocker The Descent
(2005) — premiered across the pond, and the reviews are in. The
consensus? Well, let’s just say it doesn’t exactly buck the trend…

It’s a testament to the power of the original movie that reaction to the sequel announcement back in ’06 was actually mixed, as opposed to flat-out dismissive. DreadCentral broke the news, and the blogosphere pondered. “It’s not all that surprising that our sequel crazy cinematic landscape would push for a follow-up,” mused CinemaBlend. “But I’m really glad it was this picture that got the thumbs up rather than some of its lesser competitors.” Meanwhile, Cinematical grumbled, “Hopefully the rumor of a sequel to The Descent will die quietly. How could they (damn those ‘they,’ they’re always up to no good) possibly make a sequel to The Descent?”

A good question, since all the characters perished in the original flick — but more on that later! Before long, it was announced that Jon Harris, who edited The Descent, was going to direct the unfortunately titled The De2cent under Marshall’s guidance. So despite the fact that the movie would mark Harris’ directing debut, horror bloggers were tentatively hopeful. “Harris also edited Stardust, Layer Cake, Ripley’s Game and Snatch, so he’s a damn fine editor,” FilmStalker pointed out. “I think we’re looking at the next best thing to Marshall himself.” FirstShowing agreed: “Great enthusiasm and if [Marshall] puts his faith fully in Jon Harris, then I would as well. The Descent was a perfectly crafted claustrophobic horror movie and I would attest that some great editing had to do with the tension and atmosphere… The De2cent is still a long ways out but I’m resting assured that it will live up to the first one quite a bit.”

Of course, there was still the matter of the sequel’s horrible, horrible name. The generally measured ShockTilYouDrop made fun of the “gimmicky” move, and Twitchfilm echoed snarkers all over the Internet in a post titled, “How Clever – The Sequel to ‘The Descent’ Is Called ‘The De2cent.'” It ended with the words, “Game over man. Game over.”

The movie was re-christened with the unimaginative (but more tolerable) moniker The Descent Part 2, but that didn’t help its downward buzz spiral, which picked up speed with the announcement that a good chunk of the original cast would be brought back to life for the sequel. DreadCentral, among others, mused, “I thought it was pretty damn clear no one survived those caves.” FirstShowing clucked, “With the plot details revealed today, I’d have to say that even my interest is waning at this point… All considered, this smells of bastardizing something that was great in order to make the quick, cliche Hollywood buck.”

Things quieted down for awhile, but then a slew of half-baked promo shots and trailers popped up all over the web in advance of the movie’s European premiere. Alas, they only made things worse! In a post titled, “Belay Off: ‘Descent 2’ Trailer Looks Weak,”
FilmSchoolRejects lamented, “I can’t say that I see any innovation going on in the trailer, which is a shame, although I wasn’t sure in the first place where they could go with a sequel. Not really sure there’s more to explore with those characters, and from the look of the send-a-bunch-of-people-to-be-eaten… trailer, it appears as if they couldn’t quite figure it out either.” TwitchFilm called the same preview, “A Bad Trailer For An Unnecessary Sequel.” Not too promising! And that was nothing compared to the first round of reviews from across the pond, hot off the presses this week.

If you’re in the mood for a cheap Friday night scare with plenty of gore, this is the film for you,” begins ScreenCrave. “But… The Descent: Part 2 is a simple case of déjà vu. Predictable and cliché-ridden, this superfluous sequel will no doubt disappoint fans of the original, once again proving that you can’t make the same film twice expecting better results.” Ouch! Other reviews are no better. “Light on tension and the pervading claustrophobia which made Part I unbearably bleak in places, Blakeson, McCarthy and Watkins’s script is lacking the dialogue and characterization to truly get to know this new set of crawler-fodder, stripping their demise of any emotional affect,” writes Bloody-Disgusting, echoing many others. DreadCentral chimes in that “the twist ending is absolutely atrocious,” while EmpireOnline classifies it as “An uninspired retread of a horror classic, this tries hard to justify its existence… and fails.” Even the generally ebullient AintItCoolNews wasn’t impressed, employing withering words ranging from “uninspired” to “laughable” in a review that culminates in the judgment, “just a corpse of its predecessor.”

So there you have it, I’m afraid. Even if, like Web Stalker, you ravenously absorb all things horror-newsy, this one seems destined for quick relegation to the recycling bin of yesterday’s news.