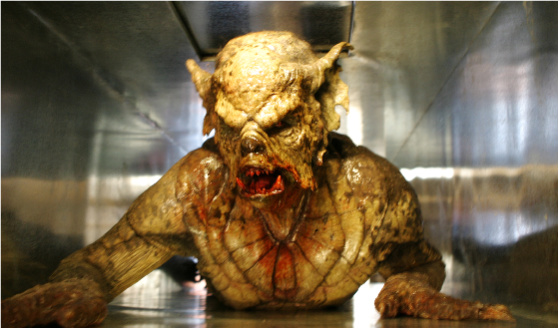 There are things as yet undiscovered by man, and no, I’m not talking about the source of that inexplicable smell emanating from somewhere beneath your driver’s seat. I’m talking biology, man! The science of hunting for undiscovered or presumed-to-be fictitious species is known as cryptozoology but take a note, science types: Anything you’re looking for, Hollywood found a long, long time ago.

Horror movies are lousy with these so-called “legendary” animals. Legendary, huh? Really? William James, the father of American psychology, once said, “There is nothing so absurd that it cannot be believed as truth if repeated often enough.” Proceeding from this fine font of wisdom, we must give props to the cryptozoological monstrosities that have transcended local legend to become worldwide brands. And for ease of reading, Dear Reader, we will henceforth refer to these “cryptozoological monstrosities” by the handy moniker short “cryptids.”

One cryptid that has unquestionably become a worldwide brand is El Chupacabra. OK, fine, it’s more like a worldwide punch line. But still, there’s nothing so absurd that people won’t believe, if you just make enough movies about it.

The Legend:
“Chupacabra” is from the Spanish words “chupar,” meaning to suck, and “cabra,” meaning goat. That’s right, this recent source of bad horror movies is, literally, “the goat sucker.” Not exactly making me pee myself with fear based on the name alone. The legendary cryptoid is said to suck blood from livestock, primarily goats. OK, there’s some blood sucking, which is at least a bit more frightening than what I was thinking before, if not as disturbing.

El chupacabra is rumored to suck goats throughout Southwest America, Mexico and Puerto Rico, but sightings have been reported as far north as Maine and as far south as Chile. Size estimates range from a medium dog to a small bear, and señor chupacabra supposedly has spines running from his neck to the base of the tail. Now we’re cooking: A bear-sized, blood-sucking monster with spines… spines are always a nice touch. So, frightening monster, what have I seen you in?

The Movies
Budding cryptozoologists, be warned — the list below is not for the faint of heart. As you can imagine, the legend of a goat-sucker doesn’t exactly draw the cream of Hollywood’s crop. Normal people are lining up for werewolves, vampires and the like, but this American special still lives in the movie equivalent of a Tijuana gutter.

Chupacabra Terror (aka Chupacabra: Dark Seas)
This 2005 stinker pursues the most intuitive approach ever: Let’s take a monster that’s unique because it’s native to American desert environments and put it on a big ship on the ocean. Of course… why didn’t Steven Spielberg think of that! Oh wait, Navy SEALS are involved, so it’s got to be good, right? And Jonathan Rhys-Davies stars, apparently part of his ongoing campaign to exploit his continuing role as Sallah in the Indiana Jones movies by cashing checks for suckalicious TV horror movies (but hey, he’s still cashing those checks… so keep on keepin’ on, JR-D).

Legend of the Chupacabra
This movie is a fictional investigation of the chupacabra myth, courtesy of Troma. Ergo, it must feature the symbol “W” on the periodic table of elements and the “W” must clearly stand for “win.”

Guns of El Chupacabra
Can a tagline alone make you want to watch a movie you know will be bad? Hell yeah, at last when that tagline is “One bloodthirsty monster, one space sheriff and one million bullets.” Now, if it had just been one space sheriff and one million bulllets, I’d rather watch figure skating, and if it’s just a million bullets and a blood-thirsty monster, I’d rather have a barium enema while watching a Dancing With the Stars marathon. But all three things together? Hello, NetFlix? Please put this piece of brilliance at the top of my queue.

Night of the Chupacabra
I’m including this movie because it has the word “chupacabra” in the title. I have no other reason to list it, and you have no reason to watch it. None. Just stop: Do not reach for your mouse, do not add the title to your NetFlix queue. Do I have to stop the car? You do not want me to stop this car …

Bloodthirst: The Legend of the Chupacabras
This is a strong title. I don’t have much else to say about it, other than there’s only one that comes close, and it’s Bloodthirst 2: Revenge of the Chupacabras. Can you go wrong with a sequel that has the word “revenge” in the title? Yes, apparently you can, and this movie proves it.

Smells Like Chapter Two
And there you are, Dear Reader: all you need to know about the cryptid “el chupacabra,” courtesy of Uncle Scottie. But don’t think that class is out. Oh no, the next time we’ll be back with “Cryptozoology Part 2: The Loch Ness Monster.”

Supah Chupa!
If you have a favorite moment from any of the chupacabra movies, please list them below. Click here for a link to mine, and please note the awesome background music, and the fact that Supah Chupah apparently is impervious to buckshot but vulnerable as regards throats (and soiled sheets). And don’t miss JR-D’s pose for the “after” portion of a SlimFast commercial.

Don’t agree with what Scott says in this blog? He doesn’t care, because he knows your mom never really liked you. Now go stand in the corner and you wait for your father to get home.