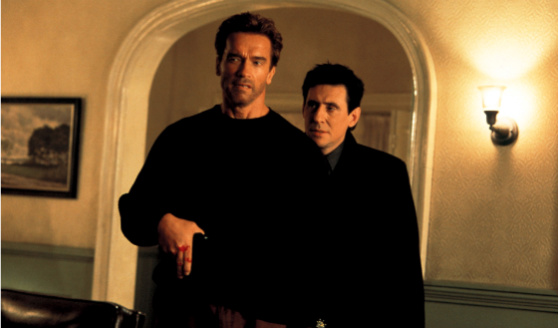 Religion and horror movies have gone hand-in-hand since the first big-screen vamp flinched away from a cross (that would be 1931, for those of you blogging at home). We’ve all seen our share of twisty heads, projectile vomiting and little girls who sound an awful lot like Jesse “The Body” Ventura, but there’s more to religion-tinged scarefests than Ol’ Scratch trying on a new people suit.

There’s even a sub-category of horror movies known as “Religious Horror.” Surprised? I was, and I write horror for a living, yo. Granted, this includes crazy made-up religions like those showcased in the Hellraiser movies and Children of the Corn series (yes, there was more than one — try eight, not counting the recent made-for-TV remake. Hell, religious horror even has its own Wikipedia page, so people other than me are putting some thought into this stuff

Depending on what we include under the term “religious,” the category can become ridiculously broad in less time than it takes Jigsaw to come up with a new idea for a deathtrap. Possession movies are a lock, but what about the aforementioned vampire flicks? Maybe Dracula is religious horror, but Twilight most certainly is not (and stop with the Mormon puns before you start — them there sparkly vamps are religion-free).

So in the interest of education, accuracy and pontification (and not necessarily in that order), Uncle Scottie is here to give you the real sub-category breakdown of the sub-category known as religious horror. We’re going to skip the obvious green-vomit flicks and discuss the finer subtleties of this sub-genre.

Time for Your Close Up, Your Holiness
Sub-sub-category: Popealicious horror
The Supreme Pontiff himself clocks his SAG time in several horror flicks. Who can forget the Patriarch’s powerhouse performance in End of Days (1999)? Mark Margolis took his walk in white for this one, sharing screen time with Arnold Schwartzenegger and Gabriel Byrne. Bohumil Svarc donned the big hat for 2006’s The Omen and Michael Shillo went uncredited as the Pope in Rosemary’s Baby. (Rumor has it that more of Shillo’s scenes were cut after a contract dispute prompted by his refusal to have the on-screen holy water replaced with Coca-Cola, which had paid handsomely for product placement.)

One Is the Deadliest Number
Sub-sub-category: Numerical religious horror
What, you thought it was coincidence that Sesame Street had its own resident vampire? That’s right: Count von Count is a horror movie buff who works RottenTomatoes.com with the best of them. The Count’s favorite, obviously, is Dracula 2000. He also likes single-digit flicks like 1988’s The Seventh Sign, in which Jesus returns to Earth to judge humanity. The Ninth Configuration (1980) is also on the Count’s list, although it’s one hell of a stretch as “religious horror” save for the fact that it was directed by novelist William Peter Blatty, who made a splash with The Exorcist (see what I did there? A “splash? As in split-pea projectile vomit? OK fine… my mom will think it’s hysterical, so screw you). More on-genre is the Johnny Depp flick The Ninth Gate (1999), a revealing look at how the rare book business can unleash the doorway to hell. The Count doesn’t mind his guilty pleasures, as evidenced by his collector’s edition DVD of The Three Trials, the best narcoleptic nun movie you’ll see this month. Just trust me on that.

The Scariest Word
Sub-sub-category: Religious horror movies that start with the word “The”
You don’t have to be a conspiracy theorist to see a frightening pattern in religious horror when it comes to “the” word of the devil. Just take a look at these supernatural spookers:

And “the” list goes on and on! No way is this just me, Dear Reader. In fact, I can prove it through numerology. There are three letters in the word “the.” Now look at the British band called “The The,” which has six letters, and compare it to the classic war movie Tora Tora Tora. Each “Tora” has two syllables just like “The The” has two syllables, and you see obviously that “the the” and “the the” and “the the” are the same damn thing: 666. Numerology to the rescue, my friends.

Now, I know I left out a ton of sub-sub-categories. So I’m calling on you, Dear Demon Busters, to contribute some interesting ones. Throw them in the comments field below: Identify a subset of religious horror movies and name some titles.

New York Times best-selling author Scott Sigler writes tales of hard-science horror, then gives them away as free audiobooks at www.scottsigler.com. His novel INFECTED was named as Border’s #1 mystery, thriller and horror novel for 2008. His next major hardcover horror/thriller ANCESTOR will be out on May 4, 2010. Speaking of religion, Scott is the founder and Supreme Vice Lord of The Church of Siglerism. He would gladly save your sold next Tuesday for a church donation today. And by “save your soul” he means swallow it, of course, but that just goes without saying.